On a number of occasions on social media, William Leo Timlin of Coon Rapids, Minnesota, USA, has falsely claimed to be a member of the San Luigi Orders, using images of our insignia taken from this website. Screenshots are provided below. 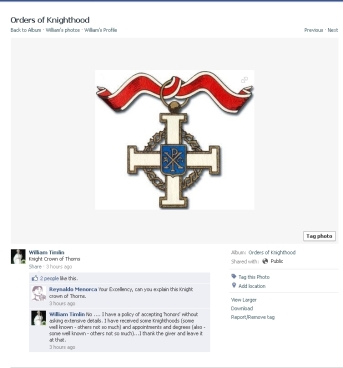 Timlin is not and has never been a member of the San Luigi Orders, and his claims are a baseless and fraudulent imposture. Timlin has a long history of assuming titles for himself without the slightest legitimate authority. He has previously declared himself to be King of Redonda, a “canonical” and “orthodox” bishop, and indeed Pope Adrian VII and Patriarch of the West. When Timlin was challenged as to his false representations regarding the Order of the Crown of Thorns he responded with a campaign of lies, malice and hatred against us on social media which has revealed his true nature very clearly. We have naturally refrained from responding in kind to his insults.

A police report from the Coon Rapids Police Department in our possession, dated April 2014, records a number of relevant matters. The complainant in the report is recorded as having found after research that Timlin was “not a validly ordained bishop, and Timlin had a history of fraudulent behavior with other bishops, priests, etc. [Reporting party] said he found numerous complaints of similar incidents involving Timlin from other churches in the nation.”

We find the following findings in the police report particularly troubling,

“[The investigating officer] attempted to call Timlin in an attempt to set up an interview. [Officer] spoke with an unidentified male who said Timlin was sleeping, and usually woke up at around 11am…in his taped statement, Timlin was extremely deceptive, and changed his story multiple times…Timlin denied that he was a bishop.”

This conduct is amply sufficient to cause us to warn the faithful against this man and his pretensions. We declare that, after his own exact words, how very truly he is indeed not a bishop, and further that his person should be anathema to all who seek to follow Christ.