1. The “Grand Prix Humanitaire de France et des Colonies” is conferred by the Prince-Abbot of the Abbey-Principality of San Luigi, in accordance with its foundation by M. Charles Leroy on 18 September 1892.

2. a. The Grand Prix Humanitaire de France et des Colonies was additionally attached to the San Luigi Orders under Prince-Abbot Louis-François and legally conveyed by him to Prince-Abbot Joseph III in 1899. As such, it was designated and remains the Cross of Merit of the Order of the Crown of Thorns. M. Louis Druel, President of the Grand Prix from 1892 until 1899, was among the Patrons of the Order.

b. With its attachment to the San Luigi Orders in 1899, the Grand Prix Humanitaire de France et des Colonies acquired an international character and ceased to be purely a French award. Although it preserves its original title, today the present-day Grand Prix has no organizational connection with the French Republic or its former colonies, and is a purely commemorative and chivalric award.

AIMS OF THE AWARD

3. The chief Aim of the award was a work of relief to help the men who sacrificed and devoted themselves “to save their fellow rescuers and particularly at sea.” Subsequently, the tasks of said Award evolved while remaining consistent with its policy and its statutes. Said Award is to honour and reward people who have distinguished themselves by their courage, dedication and selflessness, or in providing assistance of a purely voluntary nature to others.

DIGNITIES OF THE AWARD

4. The award functions as the Cross of Merit of the Order of the Crown of Thorns, but is not confined to members of that Order. The Order seeks in general to reward persons who have distinguished themselves in humanitarian, courageous or selfless endeavour, whether Christian or not.

5. This designation is conferred rarely by the Grand Master upon persons of outstanding achievement, to a maximum of ten awards in any one year and usually fewer. There are three categories:

6. Candidates, without distinction as to race or sex, must be nominated for this award by at least one member of the San Luigi Orders. Self-nomination disqualifies the candidate. The nomination must include full biographical details,  date of birth, religious affiliations if any, address, profession, honours received, academic or otherwise (with copies of certificates and diplomas of award); and a full description of the achievements which will form the basis of the award. The names of at least three references of whom inquiry may be made should be included. A small photograph should be enclosed. It is recommended that nominations should not be made known to the candidate until the award is approved, and that referees should be asked by the nominating party to maintain this confidentiality.

7. The Grand Master, either directly or through His Representatives, makes inquiry into each application, and later renders His decision; which, whether favourable or unfavourable, is final and not subject to question. If unfavourable, such decision is not to be interpreted as being in any way a reflection upon the candidate.

8. In respect of all applicants a passage fee is due as advised to cover the cost of insignia and the diploma. The Award is represented by the San Luigi Orders Charitable Trust in the United Kingdom and all membership dues and other income from the Award are to be held by the Trust and used for the charitable purposes of the Trust.

9. The Grand Master has the right to grant the Award to anyone of His Own choice, without necessarily requiring the complete fulfilment of these Regulations. As He confers all the Offices and Dignities granted within the Award, so He may revoke them without having to give any reasons for His decision.

10. Members of the Award are expected to propagate the Award and its interests by every proper means in their power. They are required to maintain contact with the Grand Master or His Representatives, and to advise promptly of any change of address. They are required also to avoid all political entanglements or discussions in their capacity as members, whether collectively or singly.

11. In the general course of events an annual Investiture of the San Luigi Orders will normally be scheduled at which new award recipients may be formally presented with their awards by the Grand Master. Members will be required to contribute an amount to be advised to assist the Orders to cover their costs in organising such an event. In addition, such occasions will normally include a collection to be applied to the needs of those worthwhile and charitable causes supported by the San Luigi Orders Charitable Trust. Additional meetings will be held as circumstances warrant.

INSIGNIA OF THE AWARD

12. The Insignia is exemplified below: 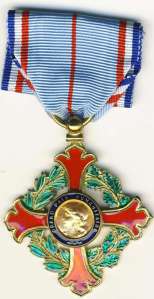