Throughout its latter history, San Luigi has served as a demonstration of the unity of faith and ecumenical bonds that are held between the Catholic, Orthodox and Anglican churches, with elements of all three traditions being held in balance by the Prince-Abbots who have latterly also been Archbishops of San Luigi. We describe this with the phrase: Orthodox in Faith, Catholic in Practice, Anglican in Outlook.

The Benedictine foundation of San Luigi

The nineteenth-century saw an unparalleled ecumenism in Orthodoxy whereby the Syrian Orthodox Patriarch Ignatius Peter III/IV created missions for the West and permitted Western Rite jurisdictions under his aegis. In 1892, the Patriarch erected an autocephalous metropolitanate for the Old Catholics of America, and consecrated the future Prince-Abbot Joseph III of San Luigi to lead this jurisdiction. The Order of the Crown of Thorns was re-founded under the same Patriarch in 1891.

After the death of Patriarch Ignatius Peter, official relations between the Patriarchate of Antioch of the Syrian Orthodox Church and the American clergy continued intact until at least the death of Prince-Abbot Joseph III. However, following a visit of the Syrians to the United States in 1928, when the Syrians requested a substantial increase in financial contributions from the Americans and were refused, matters deteriorated. In 1938, as a result of Anglican pressure, the then-Patriarch of Antioch was persuaded to issue a semi-literate statement of repudiation of those clergy who were in succession from Prince-Abbot Joseph III, and who had previously been accepted into intercommunion with the Patriarchate. However, the Malankara Syrian Orthodox Church did not repudiate Prince-Abbot Joseph III and continued to recognize him and those clergy who were in his succession. The Order of Antioch was established in 1928 to represent this group of Syrian-descended Western clergy and the Order continues today to look to the Malankara Syrian Orthodox Church as its parent body.

San Luigi in union with Rome

In 1925, Prince-Abbot Joseph III formally reconciled with the Roman Catholic Church via Archbishop Bonaventura Cerretti (1872-1933), Apostolic Nuntio in Paris, who had arranged a Papal pension for Prince-Abbot Joseph III of 12,000 francs (from 1927, 16,000 francs) yearly. Prince-Abbot Joseph III published a statement of abjuration in the journal “Le Croix” of 23 June in which he repented of receiving Holy Orders without Papal consent and likewise bestowing them on others. He retired to the Cistercian Abbaye Sainte Marie Du Pont-Colbert, Gargan, par Livry in France, where he attended Mass daily. On 6 July, Archbishop Cerretti signed a letter (reference N 5900) in which he confirmed the validity of Prince-Abbot Joseph III’s episcopate received from the Syrian Orthodox Patriarchate, which the Old Catholic Church in Switzerland had meanwhile tried to deny. The letter was published in the “Bayerischer Kurier” no. 189, of 11 July 1925.

Prince-Abbot Joseph III was permitted to wear episcopal dress at the abbey, but was enjoined from offering the Mass publicly. This so frustrated him that he was planning at the time of his death to leave the abbey and continue his episcopal mission independently. However, he did not do so and died quite unexpectedly in 1929. His body was exposed on the order of Abbot Janssens, with pontifical ornaments and a mitre on his head.

In 1923, Prince-Abbot Joseph III had made provision for his successor in San Luigi, who would become Prince-Abbot Edmond I upon his death. Prince-Abbot Edmond I was, in addition to his Old Catholic episcopal orders, a priest in the Episcopal Church in the USA, and for that reason, the jurisdiction of San Luigi became separated from Rome and took on a traditionalist or Old Catholic character thereafter. After a few years of antagonism between the Roman authorities and San Luigi, peace was restored thanks to the intervention of a member of the Order of the Crown of Thorns who was also a member of the Camerier Secret of the Pope. As an indicator of friendly relations, Prince-Abbot Edmond I was admitted as a Pontificial Academician, of the Pontificia Accademia Tiberina in Rome. His successor, the present Prince-Abbot, has been appointed to the same position. Although the San Luigi Orders are not under the jurisdiction or recognition of the Holy See, they have admitted a number of Roman Catholic clergy and laity over the years, and the aim of closer relations between San Luigi and Rome continues to be a priority today.

In response to the situation that had arisen with the Syrians and the Roman Catholic Church, Prince-Abbot Edmond I formed an alliance with Patriarch Anthony Aneed (1879-1970) (pictured right). Aneed was a bishop of the uniate Melkite Greek Catholic Church who, on 10 September 1944, convinced that the Melkite expatriate community must break from Rome’s influence, established the Byzantine Universal (Catholic) and Orthodox Church of the Americas. He has continued to be recognized by the Melkite Church to this day. In 1945, Patriarch Aneed joined with Archbishops Lowell Paul Wadle and Edgar Ramon Verostek (who would be a consecrator of Prince-Abbot Edmond II) to form the American Concordat Exarchate of America. 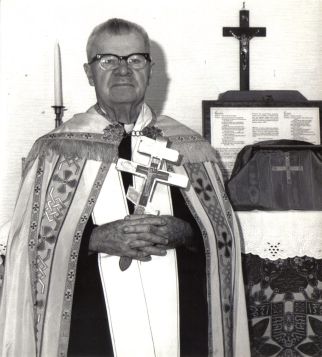 Prince-Abbot Edmond I consecrated his successor, George A. Lyman (1938-98) (who would become Prince-Abbot Edmond II upon his resignation on 16 February 1962), on two occasions. In the first of these, on 8 May 1960, he was assisted by Count Michel L’Estrange (Hugh Michael Strange), who was at that time the heir-designate to San Luigi. On 29 December 1961, by which time Strange had resigned from his position as heir-designate, Edmond I again consecrated Lyman assisted by Old Roman Catholic Archbishop Emile Rodriguez y Fairfield (1912-2005). Notwithstanding the efficacy of these acts, it was the wish of Edmond I that his successor should be enthroned after his death in a public ceremony, at which Archbishop Zeiger would conditionally consecrate him, assisted by Archbishops Fairfield and Edgar Ramon Verostek, who was an Old Roman Catholic bishop who was part of the 1944 American Concordat Exarchate under Patriarch Aneed. This ceremony duly took place on 14 March 1963 at the Macarthur Community Church in San Pablo, California.

The result of these acts was that the episcopal orders of San Luigi were not only recognized by the Roman Catholic Church (as had been published by the Holy See in respect of Prince-Abbot Joseph III in 1925) but were now accepted as valid by the Melkite Greek Catholic Church (who recognized Patriarch Aneed) and by those churches and hierarchs who had recognized the episcopate of Patriarch Zhurawetsky, which had been duly transmitted to Archbishop Zeiger. These latter were as follows:

The newsletter of Patriarch Zhurawetsky, Our Missionary, was under the editorship of the late Most Revd. Prince Kermit of Miensk, subsequently Royal Patron of the San Luigi Orders. He was ordained priest and then consecrated by Patriarch Zhurawetsky on 1 November 1970. The present Prince-Abbot of San Luigi succeeded him as Prince of Miensk and Ecclesiast of All Byelorussia on his death in 2015 (see below).

In the October-November 1988 edition of Our Missionary, Patriarch Zhurawetsky addresses a message to the Patriarchate, in which he lists his bishops by name; within that list we find both Prince-Abbot Edmond II and Archbishop Zeiger.

In the present day, the recognitions accorded to the ecclesial jurisdiction of San Luigi have been augmented by the ecumenical work of the Apostolic Episcopal Church during the period from the 1970s onwards. The Apostolic Episcopal Church, in which Prince-Abbot Edmond II was a bishop, entered into intercommunion with Patriarch Zhurawetsky and was also in intercommunion with the jurisdictions of Archbishops Fairfield and Verostek. This brought about friendly contact with many of the Orthodox Churches as well as strengthening links with the Anglican Communion (through an intercommunion agreement with the Philippine Independent Catholic Church in 1988), the Continuing Anglican movement and the canonical Old Catholic churches. Today, the present Prince-Abbot also serves the Apostolic Episcopal Church as its fifth Primate.

In recent years, cordial contact has resumed between our jurisdiction and the present-day representatives of the Syrian Orthodox tradition from which we descend directly (the Malankara Orthodox Syrian Church), and that church has issued letters affirming the details of the consecration of Prince-Abbot Joseph III in 1892.

In 2019, the Abbey-Principality of San Luigi entered into an agreement of full intercommunion and mutual recognition with the Holy Synod of the Patriarchate of (the) Bunyoro-Kitara Kingdom under Patriarch Mor Cherubim Abu-Seifein Akiiki.

Misericordia, Città di Castello, Italy (Order of the Venerable Confraternity (or Company), known as of (Our Lady of) Good Counsel of Good Death and Mercy of Città di Castello). This chivalric and Christian brotherhood can trace its origins to the last years of the first millennium (990-999 A.D.) and in its present form dates to 1230, making it probably the oldest religious brotherhood in continuous existence today. The Order is based at Città di Castello (Province of Perugia) where it has its own Magistral Church, and is governed by a Grand Prior (Grand Master). The Prince-Abbot of San Luigi has the honour to be a Perpetuum (Grand Cross) of the Order, its highest rank.