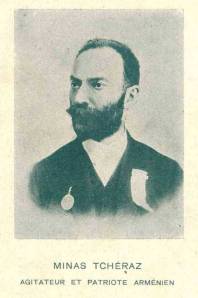 Minas Tcheraz (1852-1929) is an important figure at the inception of modern Armenian studies. He was a Patron of the Order of the Crown of Thorns.

Tcheraz was the first Professor of Armenian at King’s College, London, and held this chair for seventeen years in all. Politically active throughout, he was an activist for the Armenian Patriarchate and edited the literary and political bimonthly journal Armenia. He was part of the Armenian delegation at the Berlin Congress of 1878, acting as secretary to the Armenian Patriarch. In 1886 the Kedronakan school of higher education was founded in Constantinople under the auspices of Patriarch Nerses Varzhabedian, and Tcheraz served as its President for its first three years. He attended the World’s Parliament for Religions at Chicago as a delegate for the Armenian Church in 1892.

He became a member of the Anglo-Armenian Association in 1893 and was also elected to the Royal Asiatic Society in the same year. Through his lectures and writings he was instrumental in drawing British attention to the persecution of Armenians by Turkey, a situation that was worsening with the Hamidian Massacres of 1894-96 and that would culminate in the Armenian Genocide immediately following World War I.

Tcheraz’s proposal for the resolution of the Armenian situation was that the British should extend colonial protection to the country and that they should settle and invest there to build up its industrial and commercial base. The might of British imperial power would thus act as an effective deterrent to Turkey.

Tcheraz was also a published poet and wrote several books on Armenian culture and history.