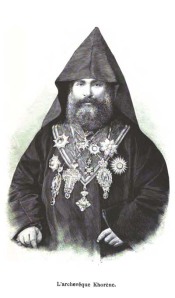 Archbishop Khorene Nar Bey de Lusignan (1838-92) was the Armenian Archbishop of Constantinople. In the last year of his life he became a Patron of the Order of the Crown of Thorns.

His older brother Prince Guy de Lusignan (Ambroise Calfa) was also a Patron of the Order of the Crown of Thorns.

He was born in Constantinople into an originally Jewish family that had converted to Catholicism as Djivan (John) -Khoren or Chorene Calfa, and claimed descent from the historic Lusignan dynasty that had once ruled Jerusalem, Cyprus and Lesser Armenia. He underwent primary education in his birthplace and higher education at the Mekhitarist institution at Venice. He embraced the Armenian Apostolic Church, and was consecrated bishop in 1867 at Ejmiatsin by Khrimian Hayrik (Mkrtich Krimian), Archbishop of Constantinople and later Armenian Catholicos. Appointed Archbishop of Béchiktache in 1873, he represented the Armenian Patriarchate of Constantinople and defended the interests of his people during the negotiations leading to the signing of the Treaty of San Stefano (1878) . At the Berlin Conference he accompanied Khrimian Hayrik and performed valuable service for him as a translator. He also undertook a diplomatic mission from the church to St Petersburg.

He was offered the patriarchate at Polis which he declined, and instead devoted himself to literature and linguistics, also becoming a published poet. His writings are strongly revolutionary and nationalistic; indeed so much so, as attested by the biography by Alice Stone Blackwell, that his demise is suspected to be as a result of poisoning by the Ottoman powers.

The Armenian Church enjoyed good relations with Prince-Abbot Joseph III for some years. In 1923 the Primate of the American Catholic Church, Frederick E.J. Lloyd (who had been consecrated by and worked closely with Prince-Abbot Joseph III), met with the Armenian Patriarch in Jerusalem, and the Armenian Church in Los Angeles was made available for services for Lloyd’s clergy. In London, the Armenian Church of St Sarkis was used by Lloyd’s archbishop in London, Churchill Sibley. Meanwhile in France, the Armenian archimandrite (later bishop) Uramchabank Kibarian d’Artchongetz (also a Patron of the Order of the Crown of Thorns) worked closely with the Gallican Church bishops of the Vilatte succession. The photo on the right shows Gallican bishop and OCT Prelate-Commander Pierre-Gaston Vigué with Archimandrite Kibarian at the Coronation of the Virgin (photograph: Eglise Gallicane).

This close co-operation with the Armenians was ended by the malicious intervention of the Anglicans in the 1930s, who had been incensed by the involvement of members of their clergy in the London services.