H.S.H the Prince-Abbot has been admitted as a Pontifical Academician, becoming Honorary Academician of the Pontificia Accademia Tiberina in Rome, Italy. 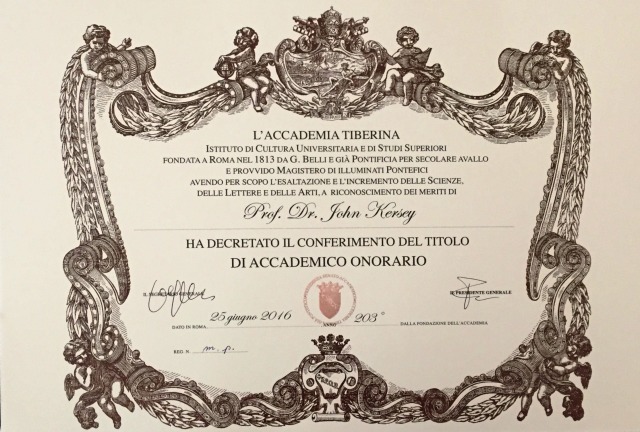 The Accademia Tiberina was founded in 1813 and received official recognition from the Sacred Congregation of Studies under Pope Leo XII in 1825. Already in 1816, the Papal States had granted the Accademia the right in perpetuity to display on its door the coat of arms of the Senate and the Roman people. In 1878 the Accademia was given permanent hospitality in the palazzo of the Cancelleria Apostolica by Pope Leo XIII.

The Accademia counts five popes among its distinguished past membership: Pius VIII, Gregory XVI, Pius IX, Leo XIII, and Pius XII, and numerous Cardinals of the Catholic Church. Among its many other distinguished members are the composers Liszt, Bellini, Rossini and Respighi, the inventor Marconi and the chemist Marie Curie.

The Accademia has also honoured Eastern Catholic prelates, including the Patriarchs of the Melkite Greek Catholic Church and the Syrian Catholic Church. During the 1930s, as a means of improving relations between the Holy See and the Abbey-Principality of San Luigi, the Duc d’Allery de Bourbon, who was a member of the Camerier Secret of the Pope, arranged for Prince Edmond I de San Luigi to be admitted an Academician of the Accademia Tiberina. The present appointment of his successor some eighty years on stands as testament to continued friendly relations with Rome.