The Old Catholic Church of Great Britain has been held in personal union with the Apostolic Episcopal Church since 2015, with Dr Kersey serving as Primate of both churches. Recent material appearing on the website of ex-clergy of our jurisdiction have made it necessary to issue a statement of clarification which we trust will show the falsehood of their claims.

Dr Kersey writes: “As Primate and Archbishop of Elmham in the Old Catholic Church of Great Britain, I have noted the statements made in respect of the Benedictine Order of St Romuald, the Old Catholic Church of Great Britain and the late Archbishop Aelred Peter Coghlan Distin at http://holycrossbenedictines.weebly.com/journal—in-hoc-signo-vinces.html with interest. The article published there on these matters is familiar to me because it consists almost entirely of my own words, first published on the website of the Apostolic Episcopal Church, which have been reproduced without my permission and in violation of my copyright by Michael Skelly and by Alistair Bate, who is a former bishop of my jurisdiction. As a general rule, I am only too happy to see my words reproduced by others, with appropriate acknowledgement; however, to see my text plagiarised and used to support lies and distortions can hardly be expected to meet with my approval.

The claims made in this article in respect of Michael Skelly are bizarre and false, and have clearly been made under the impression that our documentary archive on these matters is incomplete. On the contrary, among the considerable number of documents present here are documents that directly disprove the statements made by, or on behalf of, Michael Skelly, and that were issued both by my predecessor Archbishop Distin before witnesses and in some cases by Michael Skelly himself. We also possess a number of emails sent by Archbishop Distin that confirm the matters formalized in the documents. We find no evidence whatsoever that Archbishop Distin was “confused” or anything other than fully compos mentis at the time that he issued this documentation. By contrast, Michael Skelly wrote to me on 12 March 2007, “…may I ask you to bear the following in mind concerning myself? If I sometimes don’t answer any questions you ask me, it is not because I am being rude, but rather due to my poor memory. This is a result of a near fatal road traffic accident in 1997.” 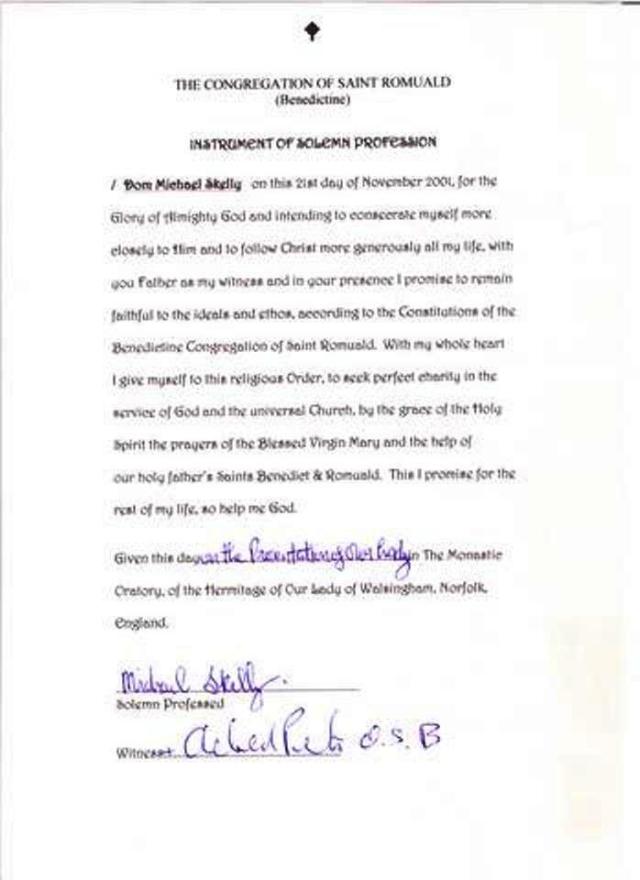 These documents prove the falsehood of the following statements: “Further to a meeting held at Drumrack near Anstruther, Fife, on 1 May 1995 between Distin and Michael Skelly, on 5 May 1995 Distin appointed Dom Michael Skelly as his perpetual coadjutor with right of succession and consequently relinquished all jurisdiction of the Church and Order. On 1 June 1996, Distin Blessed and Enthroned Dom Michael Skelly O.S.B.(C.S.R.) as Bishop-Abbot for life at Distin’s Monastic Oratory of St. Fillan located at Aipple Yaird, Newburgh, Fife. Distin then became Bishop Abbot Emeritus.”

As of the dates mentioned above in 1995-96, Skelly had yet to enter into Solemn Profession in the Order, which he did not do until November 2001. Moreover, the evidence of the certificate above is that Skelly fully accepted the authority of Archbishop Distin on behalf of the Benedictine Order of St Romuald as of November 2001, and as is evident on the certificate of consecration, that Order was within the Titular Jurisdiction of Lindsey in Anglia – that is to say, subordinate to that jurisdiction. There is not a word of any appointment as co-adjutor or abbot on the certificate of consecration or indeed on any other document.

Also in our archive is a copy of the ordination certificate of a priest from 24 November 2001, undertaken by Skelly as the ordaining bishop and witnessed by Archbishop Distin. The jurisdictional authority cited by Skelly for this action is the “Gallican Diocese of Mercia” and he describes himself as “Gallican Bishop of All Fortrenn”.

The dissolution of the Benedictine Order of St Romuald was undertaken in two stages by Archbishop Distin. In the first, on 25 November 2004, he announced that it was disbanded due to lack of support.

It appears that a “second chance” was then given, but that this produced no more encouraging a response. On 25 January 2005 Archbishop Distin dismissed all the members of the Order individually via an Ad Clerum, since they had failed to renew their commitment to the Rule of St Benedict as he had requested. “Brother Michael” is included on the list of members to be dismissed.

From these documents it can be seen that firstly that the Benedictine Order of St Romuald was indeed dissolved by Archbishop Distin, and secondly that Skelly was among those who were formally dismissed from the Order by him.

Let us now address the libelling of my immediate predecessor Archbishop Phillip Kemp. The article states, in impertinent terms, “The late Bishop Phillip Kemp claimed to have re-founded the Order in 2007 as he also claimed to be Distin’s successor, which he certainly was not.”

Having known Archbishop Kemp personally, I am in a position to vouch for his character. Whatever the issues that may have befallen us over the years, I consider him to have maintained a high standard of personal integrity as befitted not only his office as a bishop but his rank as a Captain in the British Army and an officer for a large trades union. He and I discussed the position regarding Archbishop Distin in great detail on a number of occasions, and while this relationship was complex and at times strained, it was for the greater part one of affection and positive Christian endeavour, as attested by a number of the emails in my possession. It is nothing short of disgraceful that Alistair Bate and Michael Skelly, neither of whom to my knowledge ever met Archbishop Kemp, should attempt to malign his character in this manner, and such an action reveals much about them. If they had imagined that, being dead, Archbishop Kemp would have no-one to defend him, they are sorely mistaken.

Here is Archbishop Kemp’s certificate of consecration by Archbishop Distin for the Old Catholic Church in Great Britain, dated 6 June 2004 and witnessed:

Here is Archbishop Kemp’s mandate of election as co-adjutor of the Old Catholic Church of Great Britain, issued on the same day:

Since that jurisdiction included the titular archbishopric of Lindsey, it follows that it also included authority over the Benedictine Order of St Romuald. It had been agreed that Archbishop Distin would continue as Abbot of the Order after his retirement in September 2004, and his decision to dissolve it was therefore taken during the Primacy of his successor. Authority over the Order was then exercised when Archbishop Kemp revived it, renaming it the Benedictine Congregation of St Romuald and appointing the Rt. Revd. Dom Simon Scruton as its Abbot under the name Aelred Peter II on 19 August 2006. The use of that name and office by Michael Skelly or any other party would appear to be entirely without legitimacy or warrant. It should be noted that as of 15 August 2006, Archbishop Distin had been excommunicated from the jurisdiction.

Subsequently, Abbot Aelred Peter II retired on 30 August 2008 in favour of the present Abbot, Dom Thomas Hugh Bodkin OSB(csr) who serves today in that office under the name Hugh I. 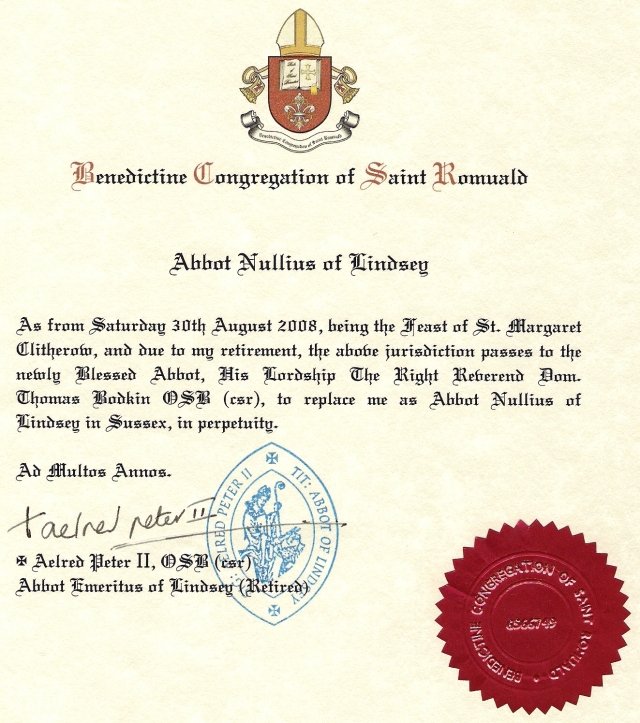 This information is more than sufficient to prove the falsehood of the claims made by Alistair Bate and Michael Skelly. In the case of Michael Skelly, who is a vulnerable and elderly man labouring under a serious neurological disability, some degree of leniency may be appropriate, not least in recognition of our previous extensive correspondence which was entirely amicable throughout. In the case of Alistair Bate, who knows exactly what he is doing, the same cannot be said to apply.

It is now over four years since Alistair Bate resigned from my jurisdiction rather than be subject to an inquiry into his conduct – an inquiry which, it should be recalled, was at an initial stage and had reached no conclusions at the point of his resignation. Almost immediately afterwards, he underwent re-consecration at the hands of a prelate not associated with our communion. Rather than embrace the freedom and independence he had apparently sought, he and those associated with him have on numerous occasions published provocative and inaccurate material online directed at my jurisdiction and at me personally. Moreover, in February 2013 I was the recipient of a crude threat of violence directed towards me by Bate’s partner, Bruno Pedrini. It should not be imagined that the decision on my part to exercise restraint in not making a public response to these items or reporting them to the relevant authorities will not be revisited in the light of present and future events.”