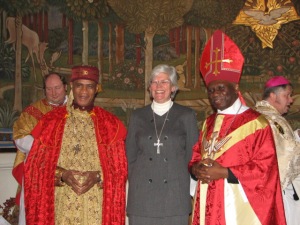 The Apostolic Episcopal Church has been informed of the death from cancer of +Leila Boyer, Presiding Bishop of the Pre-Nicene Ekklesia and Church of the Ascension, and extends its condolences to her family and clergy.

+Leila Boyer, née Christian, was the wife of the late Archbishop-Count George Boyer, OCR (1921-2008), who served as Archbishop of Great Britain and sometime Secretary of Metropolitan Synod of the Apostolic Episcopal Church. Archbishop Boyer was the designated successor of the esotericist Richard, Duc de Palatine (1919-78), who had been installed as Presiding Bishop of the Pre-Nicene Catholic Church (later renamed the Pre-Nicene Ekklesia) and Lord Bishop-Abbot of the Order of St Raphael (in addition to numerous other ecclesiastical, chivalric and academic offices) by Mar Georgius of Glastonbury in 1953. In consecrating the Duc de Palatine, Mar Georgius acted under the authority of the British Exarchate of the Order of Antioch.

Following the death of Archbishop Boyer, Archbishop John Kersey, now Primate of the AEC and Prince-Abbot of San Luigi, was installed in the offices he had held within the AEC and the Order of Corporate Reunion, while +Leila Boyer succeeded her late husband as Presiding Bishop of the Pre-Nicene Ekklesia and as a member of the Council of Three established by the Duc de Palatine. As an esoteric jurisdiction, the Pre-Nicene Ekklesia accepted the ordination of women to the major orders, and accordingly +Leila had been consecrated bishop by her husband in 1990.

+Leila was a welcome guest at Archbishop Kersey’s installation service and at several subsequent ecumenical services in London. In her later years she completed a biography of Richard, Duc de Palatine, and edited his works for publication. She was generous in sharing a number of archival, documentary and liturgical resources concerning the Duc de Palatine with Archbishop Kersey, and helped make the Duc de Palatine’s work better known among those who had a capacity to benefit from it.

Her concern for others was notable, and although deliberately self-effacing and unconcerned with personal status, the effect of her spiritual presence was striking. After her husband’s death she was increasingly concerned with working outside formal church structures, and emphasised the unified nature of her mission across all boundaries of denomination or creed. May she rest in peace and rise in glory!