Saint John Churchill Sibley (1858-1938) was Missionary Archbishop and Vicar General of the Order of Antioch in England. A distinguished organist and the first Head of Music at Goldsmith’s, London, he later served as a representative bishop in England for the American Catholic Church, which had been founded by Prince-Abbot Joseph III (Vilatte) in 1915.

Born in Crewkerne, Sibley’s career was as a professional organist firstly at Clifton Grammar School, and then at Swansea Grammar School from 1875-76. Subsequent appointments were at Seaton Parish Church (1876-78); Ampthill Parish Church (1878-81); Park Church, Chelsea (1881-91);  St Stephen’s, Hampstead (1900-02) and St Lawrence Whitchurch (Canons) Church, Edgware (1914-28). He was organist to the Royal Albert Hall Festival Concerts between 1888 and 1918 and conducted the National Sunday League Oratorio Concerts at the Queen’s Hall between 1894 and 1901. He was conductor at Buxton Gardens in 1899 and of the Harrogate Municipal Orchestra in 1909. A programme for one of his concerts is reproduced below.

In 1891, Sibley became Head of Music and Organist of the newly-formed Goldsmith’s Institute, London (now Goldsmith’s College), a position which he held until his retirement in 1895, at which he was presented with an engraved gold plate and watch as a token of thanks. He was also one of the first Directors of Studies of the Victoria College of Music (of which the present Prince-Abbot is a Fellow honoris causa) and served as a member of the Council of Examiners of the London College of Music. At St Lawrence Whitchurch, he was one of the successors of Handel (mounting a Handel Festival in 1916) and worked with C.W. Scott-Moncrieff (the hymnodist and later a prominent member of the Theosophical Society) as Rector. His books include “Handel at Canons”, “The voice and its control” and “Steps in Harmony”. His short organ piece “A Song of Gladness” is still in the wedding repertoire. In 1894 he received the honorary degree of Doctor of Music from a university in the United States.

During the 1920s, Sibley came into contact with the American Catholic Church, which was then led from Chicago by Archbishop Frederick E.J. Lloyd, the initial connexion being because of Sibley and Lloyd’s shared musical interests. This provided Sibley with the opportunity to pursue his vocation, and on one of the Archbishop’s visits to England, he received conditional baptism, confirmation, the minor orders, subdiaconate and diaconate. On 23 April 1924, at his private chapel dedicated to St Edythe, Sibley was ordained priest by Lloyd and thereafter began a mission of the ACC in England. This proved satisfactory, and on 29 September 1929 in the chapel of the Congregational Church Chicago Theological Seminary, he was consecrated bishop by Lloyd assisted by Daniel Cassell Hinton and Samuel Gregory Lines. He was appointed Metropolitan of the ACC in the British Empire and Missionary Archbishop and Vicar General of the Order of Antioch in England, the Order having been founded the previous year. 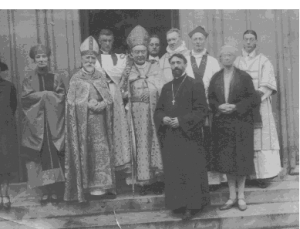 When Sibley returned to England it was decided that his mission should bear the title “Orthodox Catholic Church in England”, since that of the ACC was geographically specific, and he led this body from his home at 22, Ferndale Road, West Chelsea. Since about 1928, the Armenian Church of St. Sarkis in London had been open to both Sibley and Lloyd to celebrate there, as a result of a friendship that had developed between Sibley and Fr. Meroujan D. Khosrov, its priest. The photograph shows Lloyd (centre) and Sibley (centre left) at St Sarkis’ with Fr. Khosrov and others, including Anglican clergy. This collaboration was ended in 1934 as a result of intervention by the Anglican hierarchy.

In 1929, Sibley appealed for the sum of £15,000 to restore Minster Abbey, Kent, a medieval manor house erected on the site of the Benedictine nunnery founded in 670 by Egbert, King of Kent. The idea was that this abbey would be a “National Centre of Christian Fellowship” under the direction of the Order of Antioch, and could become a base for oecumenical dialogue between the denominations of East and West. However, financial considerations and press hostility prevented the plan continuing, and in 1937 the abbey was instead acquired by some German Roman Catholic Benedictine nuns.

By 1929, Sibley had met Frederic Charles Aloysius Harrington (1879-1942) whom he would ordain priest on 29 June 1934. Harrington was strongly drawn towards Orthodoxy and earlier in life had converted to the Russian Orthodox Church. Probably as a result of an introduction by Harrington, Sibley came to know Ebenezer Johnson Anderson (Kwamin Ntsetse Bresi-Ando) (1884-1970), a Ghanaian, and consecrated him as Mar Kwamin  for the African Universal Church on 6 March 1935. However, when Mar Kwamin consecrated Harrington on 1 September 1935 he thereby broke his agreement with Sibley that he would not perform episcopal acts in Britain, and Sibley duly excommunicated both of them.

In 1931, Sibley had met the future Mar Georgius of Glastonbury, who would serve as his Ecclesiastical Protonotary, and the two men discovered that they were members of the same London gentlemen’s club. Mar Georgius wrote of him in “Varied Reflections”, “He was a very learned man, a fine musician, having been by profession a church organist, very happily married to a wife, who outlived him. I last saw him when I was on an omnibus in the Fulham Road. There he was in black, with black spats, purple stock, and wide-brimmed hat with rosette, making for the saloon bar of the “Redcliffe Arms”, where he visited once a day, and was well liked and respected by “mine host” and the habituals. He gave me a brief wave of acknowledgement. This was in 1938, and he passed away soon afterwards.” 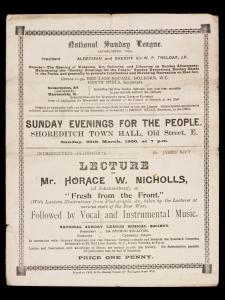 Sibley additionally served as administrator of the Intercollegiate University, an institution offering degrees by correspondence instruction that had been founded in 1888 in the United States and had since become part of the ACC. The University was described in its publicity material as offering “exceptional advantages to earnest students through its varied carefully arranged courses of Study in Theology, Arts, Music and Practical Business”, with degrees conferred “after thorough preparation” at an annual service in St George’s Church, Bloomsbury, which was followed by a banquet and speeches. Both Sibley and the University were on several occasions attacked in the gutter press, reflecting the fact that private tertiary education was then, as now, regarded as a major challenge to the educational establishment. At the annual banquet in 1938, at which Sibley retired, he was thanked for his “long and generous services to the cause of the University” and presented with a loving-cup. The University itself survived until 1942, when its remaining students were transferred to the new University of Sulgrave. In July 1939, “The Inter-Collegian”, its journal, said in its tribute to Sibley, “He was a man of strong and somewhat complex character, uniting something of a Richelieu with a marked kindliness and great personal charm.”

In 1934, Sibley ordained Alfred Frederick Kaufmann, an Australian by birth, priest at Mudeford, and thereby established a mission in Bournemouth. This centred firstly on the Christchurch Fellowship of Divine Healing, which met at a local Masonic Hall, and on the celebration of the Liturgy in members’ homes. By 1936, Fr. Kaufmann had acquired the use of a flat above a shop at 548 Christchurch Road, Boscombe, and consecrated this as the Chapel of the Holy Spirit. Kaufmann returned to Australia in 1936 to visit his parents and Sibley celebrated the Liturgy in Bournemouth during his absence. On 16 January 1938, Sibley ordained William Martin Andrew, a solicitors’ clerk, priest for the Bournemouth mission. During the ensuing decade, Fr. Kaufmann divided his time between Britain and Australia, eventually returning to his homeland permanently, and Fr. Andrew assumed responsibility for the Bournemouth mission in his place.

On 5 October 1935, Sibley assumed overall responsibility for the oversight of the Confraternity of the Kingdom of Christ, a religious community at Barnet, north London, under the direction of Archbishop John Sebastian Marlow Ward (1885-1949) (whom he had consecrated on 6 October) and his wife Jessie. John Ward was a Cambridge graduate, a former headteacher (as was Jessie Ward) and from 1918-30 was Head of Intelligence for the Confederation of British Industry. A senior Freemason, his books on the Craft are still in use today.

In 1927, both of the Wards had had a dream in which “they were summoned into the presence of a great Angel, told that Christ was about to begin His Descent through the Celestial Planes to the Earth and asked to help in the Preparation for His Coming. This great Angel, of the order of the Thrones, was to become their constant Guide and helper in the years ahead.” The Wards resolved to devote the remainder of their lives to this task, and to begin this work, John Ward gave a series of lectures. These attracted several followers who then pooled their resources with the Wards, and bought Hadley Hall, a large house with grounds at 89, Park Road, New Barnet, North London, where they lived in community. On Sibley’s death on 15 December 1938, Ward would succeed him as Primate of the Orthodox Catholic Church in England, and that church subsequently canonised Sibley.