The book “Across St Louis’ France” was published in 1971 by the Mitre Press in London. The author, the Very Revd. Canon George F. Tull, was a priest of the Old Roman Catholic Church of Great Britain and Grand Prior for England and Wales of the San Luigi Orders.

The book jacket says of him, “A Londoner by birth but countryman through choice, George Tull began his travels in Europe at the end of the war, and there are now few Continental countries which have not inspired one or more of his articles and poems. A reviewer of The Quiet Ways, a selection of his poems, wrote that “one is left to wonder on what terms such peace of mind is possible.” The answer perhaps is that he lives happily without radio, television, the cinema and daily newspapers.” 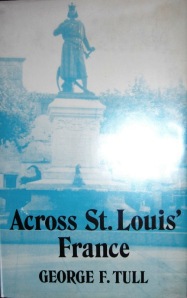