Archbishop Anthony Joseph Aneed (1879-1970) was Patriarch of the Byzantine Universal (Catholic) and Orthodox Church of the Americas, a church in which Prince-Abbot Edmond I held office. He was a member of the Order of the Crown of Thorns. In 1946 he was responsible for the re-establishment of the ecclesial jurisdiction of San Luigi in enthroning Prince-Abbot Edmond I as Archbishop.

Aneed was born in Beirut, Lebanon, on 27 February 1879. As a young man without material advantages, he obtained employment at the railway station there. However, he was also active as a layman in the Melkite Greek Catholic Church, one of the Eastern Catholic Churches in communion with the Holy See, and became a member of the Eastern Patriarchal Delegation to the Great Centennial in honour of the 1,500th anniversary of the death of St John Chrysostom. In 1908, he was a participant in a ceremony of the Delegation at the Sistine Chapel in Rome, presided over by Pope Pius X and with the participation of Patriarch Cyril VIII of the Melkite Greek Catholic Church and Metropolitan Archbishop Athanasius Sawoya of Beirut and Gebeil (Byblos). In this same year, Aneed was appointed as secretary to Archbishop Sawoya.

On 11 June 1909, at the Monastery of St. George, Makeen, Mt. Lebanon, Aneed was ordained priest by Archbishop Sawoya in the presence of Bishop Agapios Maloof of Baalbeck and a group of monks of the Order of St. Basil. At this time, his gifts as a singer were considered to be of particular value to the Church. However, he was soon advanced, on 29 October 1910, to the position of Exarch of the Archdiocese of Beirut and Gebeil, and in 1911 moved to the United States to begin this phase of his work. 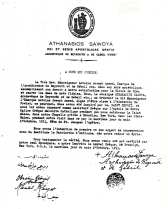 Aneed settled in New York, and began missionary work in Brooklyn where Melkite parishes had started to form. Soon after his arrival, Archbishop Sawoya visited the United States (against the wishes of the Pope) and stayed with Aneed for some time. On 9 October, Archbishop Sawoya consecrated Aneed as Assistant Bishop in his private chapel at Brooklyn (see certificate of consecration, right). While Patriarch Cyril IX Mogabgab, Melkite Patriarch 1925-47, later recognized this consecration, the Holy See did not.

From March 1915, Aneed served the Syrian parish of St George’s Church, W. State Street, Milwaukee, as a priest. On 14 June 1918 he received formal permission to use the title Exarch from Archbishop Sebastian Messmer of Milwaukee. In the following year, Aneed visited Archbishop Sawoya in France, and published “Syrian Christians. A Brief History of the Catholic Church of St. George in Milwaukee, Wisc. and a Sketch of The Eastern Church” (St. George Church, Milwaukee 1919) with a preface by Messmer. In 1921, Aneed left Milwaukee to establish and pastor a new parish at St Ann’s, New London, Connecticut, where he would remain until 1934. Here, a new church was built and continues to exist today.

He was active as a priest in New York until 1942, when he moved to San Francisco and built up a ministry to expatriate Syrian-Lebanese Christians. Convinced that his flock was not adequately served by the extant denominations, and also that the Melkite Church must break from the subjugation of Rome, he sought a path to independence.

In those days, California was a lively gathering-place for clergy of the smaller denominations, and Aneed established co-operation with Archbishop Lowell Paul Wadle of the American Catholic Church of Laguna Beach and Archbishop Edgar Ramon Verostek of the North American Old Roman Catholic Church, as well as with Prince-Abbot Edmond I. The aforementioned prelates were to become members of the Order of the Crown of Thorns, as also several members of their flocks, although Archbishop Wadle led his particular so-called “American Chapter” of the OCT into a short-lived schism (he and his followers having been regarded as heretical by Prince-Abbot Edmond I, and therefore expelled in 1950-51). Further co-operation was secured with Archbishop Henry Kleefisch, an attorney who had received consecration from the Russian Orthodox Church and became a bishop under Aneed, Archbishop Wallace de Ortega Maxey of the Ancient Christian Fellowship and Apostolic Episcopal Church, and Bishop Charles Hampton, formerly of the Liberal Catholic Church. All of these bishops participated in subconditional consecration for ecumenical reasons, in order to secure acceptance of their ministry from the widest range of members of the mainstream denominations.

On September 10 1944, Aneed, Wadle and Verostek established the American Concordat Exarchate, with Aneed as its Exarch (a Codicil to this document was added in 1945 when Kleefisch and Hampton joined the organization). On the aforementioned date, the three bishops united their successions, and established The Byzantine Universal (Catholic) and Orthodox Church of the Americas from the foundation of Aneed’s work in California. It was stated that the object of this body was “to free the Melkite Church, if possible, from foreign domination, and to give it Freedom under the authority of Jesus Christ to go into all the world and preach the Gospel of the Love of God.” The intention was to restore the Melkite tradition to its position before union with Rome. 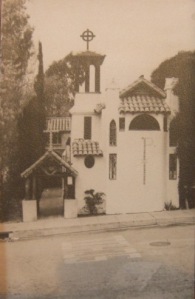 At a Synod on 1 April 1945, at St Francis’ Church, Laguna Beach, California (pictured left), Aneed was elected Primate of the Byzantine Universal (Catholic) and Orthodox Church of the Americas. He was enthroned as Patriarch Antionius Joseph I on 1 January 1946. On the same occasion, Aneed assisted by Wadle and Kleefisch conditionally consecrated Prince-Abbot Edmond I, appointing him Titular Bishop of Caesarea in Cappadocia in the Byzantine Catholic Church,  and enthroned him then and there as Grand Master of the Order of the Crown of Thorns and Archbishop of San Luigi. This was a formal re-establishment of the ecclesial jurisdiction of San Luigi after the repudiation of the Syrian Orthodox Church published in 1938.

On 29 August 1948, Aneed opened the Seminary of St Anthony, The Star of the Desert, at Sunnymead, California. By this time, the Concordat had expanded into the Federation of Independent Catholic and Orthodox Bishops (FICOB), a body into which bishops of other churches professing the Nicene Creed and practising the sacramental life were accepted and granted additional commissioning in the successions embodied therein. During the later 1950s, Herman Adrian Spruit became extremely active within this group. Just as with Wadle, Prince-Abbots Edmond I was concerned by, and Prince-Abbot Edmond II strongly opposed to, the liberal nature of Spruit’s profession of faith, and their correspondence reveals their reservations in some detail. It was for this reason that relations between the Federation and the Abbey-Principality did not prosper during the 1960s.

On 5 June 1960, Aneed celebrated the fiftieth anniversary of his priesting at the Cathedral of the Merciful Savior, San Diego, California, at a service that was attended by many of the clergy who had become associated with him, including Prince-Abbot Edmond I. By the following year he was reported by Prince-Abbot Edmond I to be in very poor health, and Deacon James B. Gillespie, (Officier OCT), then wrote of him, “Bp. Anthony is quite old but not always so inactive. He has been called a “true son of the desert”…When he does get a chance, he will celebrate in public, but he is rather far from an altar at the present time – except that in his home. Rome has courted him for years, but he will not relinquish his wife. It seems they made their last big attempt in 1955 through Bp. Buddy of San Diego.”

In September 1961, it was announced that Aneed would come out of retirement and take over the Church of the Merciful Savior in San Diego, but this appears to have been short-lived. At his death on 24 August 1970, he was survived by his wife, Helen, whose biography of him remains unpublished, and his jurisdictional successor was Herman Spruit. He continues to be memorialized by the Melkite Greek Catholic Church.