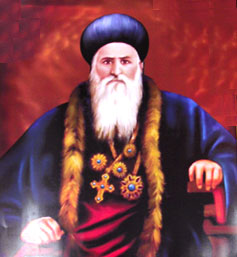 Moran Mor Ignatius Pathros (Peter) IV (sometimes counted as III) (1799-1894), who led the Syrian Orthodox Church for 22 years as its supreme head (1872-94), was the 116th in the line of canonical Patriarchs of Antioch in the Apostolic See of St. Peter. He is regarded as the architect of the modern Syrian Church. He is popularly known as “Peter the Humble”.

The Patriarch was responsible for the re-foundation of the Order of the Crown of Thorns in 1891, appointing Prince-Abbot Joseph III (who had been consecrated on his mandate) as its Grand Master, and became one of its Patrons.

Born in a well known Christian family of Turabdin in south east Turkey, he spent his childhood days at the Mor Hananyo Dayro (Deir al-Za`faran Monastery) which was the centre of the Syrian Church for many centuries. His priestly formation was at this monastery. He was consecrated as Mor Yulius, Bishop of Taifat Alsrien Al-Qadima in 1846 by Moran Mar Ignatius XXXII Elias II, Patriarch of The Syrian Patriarchate of Antioch and All the East between 1838 and 1847, who also appointed him “Julius, Metropolitan of the World”. Between 1850 and 1875 he was Superior-General of The Orthodox-Catholic Guild of S. Columba of Iona.

As the diocesan Metropolitan he succeeded in settling the row with the Roman Catholic Church and recovered many of the ancient Monasteries and churches which were under dispute. It was during his stay at Constantinople that his immediate predecessor Patriarch Mor Yakub II passed away. Because he had difficulty making the long journey to Mardin he informed the Synod of his inability to attend the patriarchal election. But the Synod’s unanimous decision was to elevate Mor Yulius as the next Patriarch; a decision which he politely refused to accept. However under repeated persuasion, he agreed to abide by the decision of the Holy Episcopal Synod.

That title of “Metropolitan of the World” reflected Mor Yulius’s ecumenical ambitions. He had wished for the reunion of Christendom, and accordingly sought to promote a “Reunion Movement” that would bring Orthodoxy to the West, gaining the support of his Patriarch for this mission. However, since his charge did not permit him to leave Syria, he was compelled to look for a man who would be able to fulfil such a mission on his behalf. When he met the former Presbyterian missionary and Roman Catholic priest Jules Ferrette (1828-1904) in 1865, he felt that he had found someone worthy of this trust and capable of achieving its aims. In the event, Peter the Humble would be the progenitor of not one but two Western missions, the second under Prince-Abbot Joseph III, each of which shared the common characteristic that it was not a local branch of the Syrian church, but an indigenous and autocephalous Roman Rite entity that was Orthodox in faith but Western in character and mission.

At last on 16th June 1872, on the day of Pentecost, he was enthroned as the 116th Patriarch of Antioch at the ancient St. Mark’s Dayro in Jerusalem. The Patriarch after his enthronement went to Amida (Omid / Dierbakir) and stayed there for a short period. The Dayro there was reconstructed under the advice of the Patriarch. In 1872 His Holiness ordained Rabban Abdul Sattuf as Metropolitan with the name Mor Gregorios for the Archdiocese of Jerusalem and then left for Constantinople. Through the exertion of His Holiness, the Syrian Christians received direct representation at Constantinople (recognition as an independent millet in Ottoman Turkey) and were honoured with other exclusive rights, thus fulfilling the long standing aspirations of the community.

During 1875-77 the Patriarch was in India resolving the situation that had developed regarding the Malankara Archdiocese. His work revived the Syrian Church in this area and set in place developments that would lead to its further stable growth. After this he returned to Constantinople where he established a new church in the name of the Mother of God. While residing there, Ramban Elias who later became the Patriarch of Antioch and the all the East (St. Ignatius Elias III) stayed with him for a while. Later the Patriarch left for Mor Hananyo Dayro where he consecrated Holy Myron again. The holy father spent the remaining years in this monastery.

Peter the Humble would explicitly advocate ecumenism on a scale that is astonishing for his time. He was invited to the 1892 Old Catholic Congress at Lucerne, but could not be present; nonetheless he sent a letter of support for the objects of the Congress. That same year, he wrote to the Apostolic Delegate of the Near East and told him he was willing to submit to the Holy See. He offered to give up his position as Patriarch in favour of a lesser role as Catholicos or Exarch of Syria in order to unite with other Orthodox, but the political pressure placed on him by the Turks precluded this.

The proposals of Peter the Humble were not merely ahead of their time, but, as history has proved, almost entirely without precedent or successor; a totally exceptional approach to the insular understanding of the Orthodox faith of his time and a progressive vision of the means by which that faith might be nurtured.

At 4.00 am on Monday, October 8, 1894, Moran Mor Ignatius Pathros IV passed away. He was then about 96. The mortal remains of the holy Patriarch were interred at the Mor Hananyo (St. Ananias) Dayro, which is also known as the Kurkkuma Dayro orDeir al-Za`faran Monastery. This ancient monastery is situated today in south east Turkey.