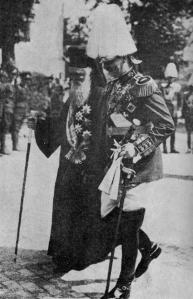 In 1938, Carol II banned political parties and established a royal dictatorship, choosing Miron Cristea to be the Prime Minister of Romania, a position from which he served for just over a year, between February 11, 1938 and his death. The photo at left shows the King with Miron Cristea as Prime Minister.

Miron Cristea was a member of the Order of the Crown of Thorns.

Born in Topliţa to Gheorghe and Domniţa Cristea, of a peasant family, he studied at the Saxon Evangelical Gymnasium of Bistriţa (1879–1883), at the Greek-Catholic Lyceum of Năsăud (1883–1887), at the Orthodox Seminary of Sibiu (1887–1890), after which he became a teacher and principal at the Romanian Orthodox school of Orăştie (1890–1891).

Cristea then studied philosophy and modern philology at the University of Budapest (1891–1895), where he was awarded a doctorate in 1895 – with a dissertation about the life and works of Mihai Eminescu (given in Hungarian).

Returning to Transylvania, he was a secretary (between 1895 and 1902), then a counselor (1902–1909) at the Archbishopric of Sibiu. It was then that he was ordained deacon in 1900 and archdeacon in 1901. Cristea became a monk at the Hodoş Bodrog Monastery, Arad County in 1902, taking the monastic name of Miron. He climbed the monastery hierarchy, becoming an archmonk in 1903 and a protosingel in 1908.

In 1908, following the death of bishop Nicolae Popea, the election of the bishop of Caransebeş led to a dispute between the Romanian Orthodox Church and the Imperial authorities, when, twice in a row, the elected bishops were not recognized by emperor Franz Joseph I of Austria, at the recommendation of the Hungarian government. Cristea was the third choice, being chosen on November 21, 1910 and obtaining the recognition from the authorities; he became an archbishop in 1919.

During World War I, as Romania joined the war on the Allies’ side, Cristea signed on September 1, 1916 a public letter to the parishioners printed at Oradea by the Orthodox Bishophric of Transylvania. The letter called to arms all believers against “Romania the new enemy which sinfully covets to ruin the borders, coming to conquer Transylvania”.

Towards the end of World War I, on October 18, 1918, it was founded the Central National Romanian Council, an organization which fought for the union of Transylvania and Romania. On November 21, Cristea, as archbishop of Caransebeş joined the organization and recognized it as the only ruling body of the Romanian nation in Transylvania. On December 1, he was (with Vasile Goldiş, Iuliu Hossu, and Alexandru Vaida-Voevod) a member of Austro-Hungarian Romanian delegation that called for the unification of Romania and Transylvania.

On May 28, 1919, the King and government of Romania went to the grave of Michael the Brave in Câmpia Turzii and Bishop Cristea led the religious service of commemoration and gave a nationalist speech in which he drew a parallel between King Ferdinand I and Michael the Brave and commended the King for not stopping at Turda, but continuing all the way to the Tisa River.

Because of his collaboration with the German occupation troops, the Metropolitan-Primate Conon Arămescu-Donici was forced to resign on December 1, 1919 and on December 31, 1919, Cristea was chosen by the Great Electoral College to be the Metropolitan-Primate of Whole Romania with 435 votes out of 447. On November 1, 1925, after a Synod was held, Cristea was named Patriarch of the Romanian Orthodox Church.

As Metropolitan-Primate and later Patriarch, Cristea continued the tradition of his predecessors to support whatever government was in power. The Church acted as an agent of the state, for instance, in 1920, Cristea asked the clergymen to help the state financially by encouraging the faithful to buy government bonds. Cristea’s discourse incorporated national elements, arguing that the Orthodox faith was part of the Romanian soul and he argued that the church’s values include “patriotism” and “obedience towards authorities” alongside “faith and morality”.

Cristea introduced reforms such as the Gregorian calendar to the church, including, briefly, the celebration of Easter on the same date as the Roman Catholic Church. This was opposed by various groups of Old Calendarists, especially in Moldavia, where Metropolitan Gurie Grosu of Bessarabia refused to accept the orders given by the Patriarchy.

In 1927, he was chosen by Ionel Brătianu to be one of the three regents of King Michael I of Romania, alongside Prince Nicholas of Romania and Gheorghe Buzdugan.

Cristea’s involvement in politics was, however, controversial, being criticised by journalists at Epoca newspaper, who accused him of trying to play the role of Rasputin and being a member of the palace camarilla. This resulted in the issue being confiscated by the police and their offices being vandalized by hooligans, allegedly incited by the government.

A dispute arose with philosopher Nae Ionescu, after Ionescu attacked Cristea in newspaper articles following a dinner at Cristea during the Nativity Fast during which they were served turkey. As a response, Cristea requested the painter Belizarie to paint Ionescu’s face on a devil in the Patriarchal Cathedral in Bucharest’s Apocalipse-themed mural.

In 1929, because of a serious illness (identified as leucocythemia by his medics), Cristea retired for several months to a country house in Dragoslavele, Muscel County, but despite the bleak predictions about his health, he was soon able to return to Bucharest.

On July 6, 1930, Carol II returned to Romania to assume power. On July 7, Miron Cristea and Constantin Sărăţeanu resigned from the regency and the following day, the Parliament revoked the 1926 law which gave the throne to Mihai, Carol becoming King again.

Cristea kept his loyalty to King Carol II throughout his rule. In March 1937, as the King attempted to suppress the influence of the fascist movement known as the Iron Guard, Cristea responded to the request sent by the Tătărescu government on limiting the relationship between the clergy and the Iron Guard. Cristea invoked a Holy Synod which banned clergy from joining the fascist organisation and disallowed political demonstrations and symbols in the churches.

In a bid for political unity against the Iron Guard, which was gaining popularity, in 1938, Carol dismissed the government headed by Octavian Goga. The activity of the parliament and of all political parties was suspended and the country was to be governed by royal decree. Cristea was named Prime Minister on 11 February 1938 and the government included seven former prime-ministers and people from all major parties except for Codreanu’s Iron Guard and Goga’s Lăncieri, which had violently clashed. Time Magazine described him as a “puppet Premier” of Carol II, whereas historian Joseph Rothschild considered that it was Cristea’s vice-prime-minister, Armand Călinescu, who held the power in the Cristea government.

In his inaugural speech, Cristea denounced political pluralism, arguing that “the monster with 29 electoral heads was destroyed” (referring to the 29 political parties which were to be banned) and claiming that the king would bring salvation.

The new government stopped the antisemitic violence that was unleashed under Goga’s rule, but the antisemitic legislation in place was not altered, as Nichifor Crainic’s fascist ideology was compatible with the theological-political stance of the Romanian Orthodox Church.

Cristea’s government announced a program which put restrictions on various freedoms, especially related to censorship and the introduction of authoritarian measures such as military rule (by declaring a state of siege, which allowed among other things, searches without warrant and the military appropriation of privately-held guns) and the death penalty, but it promised prosperity through some constitutional and social reforms, which were to include the “organized emigration of Jewish surplus population”, that is, the expulsion of Jewish people who came to Romania during or after World War I. However, it eased the Jewish restrictions imposed by the Goga government.

The external politics of the Cristea government were based on seeking an alliance with the United Kingdom and France, away from the friendship with the Berlin-Rome Axis supported by the Goga government. In 1938, Carol II was made a Knight of the Garter by King George VI of England. Cristea also visited Poland, with which Romania had an alliance and with which it tried to create a neutral block between Nazi Germany and the USSR.

Among the policies Cristea introduced during his rule as Prime Minister was a crackdown on Protestants, by disallowing religious services to small congregations with less than 100 heads of families, basically banning the services in around 1,500 small chapels belonging to various Christian denominations. Despite worldwide protests from the Baptists, the ban was only lifted after Cristea’s death by his successor, the National Renaissance Front’s Armand Călinescu.

On February 20, a new constitution was announced, which organized Romania as a “corporatist state” similar to that of Fascist Italy, with a parliament made up of representatives of the guilds of farmers, workers and intellectuals. Four days later, on February 24, the constitution was approved, with 99.87% of votes in favour, through a plebiscite whose integrity was disputed.

Upon the approval of the new constitution, Miron Cristea’s government resigned on March 30 in order to form a new government on the same day. The new government banned all political parties, their activity being only suspended before that. With Romania effectively crushed between the influences of Nazi Germany and Soviet Russia (both of which were opposed to the Church and the monarchy), it was almost inevitable that, as Allied diplomacy failed in the years leading up to the outbreak of war, the ideology of the leadership would move in the direction of an Italian-inspired Fascism.

By the end of 1938, Carol II had introduced even more Fascist-inspired elements: for instance, on January 1, 1939, during the government’s visit to the Royal Palace, they wore uniforms and when meeting Carol, Cristea and the ministers greeted him with the Fascist salute. As with many Orthodox of that time, Cristea’s rhetoric had become more explicitly anti-Semitic and xenophobic. This was in marked contrast to his earlier positions. In 1928, he had made an appeal towards the Romanian students to observe the Golden Rule and had expressed regrets for attacks and profanations of synagogues.

Another change in Cristea’s government was on February 1, 1939, which gave extensive powers to Călinescu, who became virtually the head of the cabinet, while Cristea remained nominally the Prime Minister at the King’s insistence.

His health deteriorated in January 1939, suffering from two heart attacks, which prompted his doctors to recommend him to stay in a warmer place for a few months, in order to avoid the harsher Romanian winter. On February 24, 1939, Cristea arrived in Cannes, France, but contracted pneumonia while waiting for his niece in the Nice railway station. He stayed in Cannes for treatment, but died two weeks later, on March 6, of bronchopneumonia complicated by heart disease.

His body was sent by train to Bucharest, the funeral train stopping in all stations in Romania to permit believers to pay their last respects and say prayers before the body. On March 7, a state of national mourning was ordered and all festivities were cancelled. A week later, on March 14, funeral services were held in Bucharest, Cristea being buried in the Patriarchal Cathedral.

His birthplace home in Topliţa is currently a museum dedicated to his life. Each year, on Cristea’s birthday, the Romanian Orthodox Patriarchy organizes “Miron Cristea Days”, dedicated to the first patriarch of the Church and which feature various cultural activities.

In July 2010, the National Bank of Romania minted a commemorative coin bearing Cristea’s image as a part of a collectors’ series of five coins showing the Patriarchs of All Romania. This proved controversial because of Cristea’s anti-semitic record.