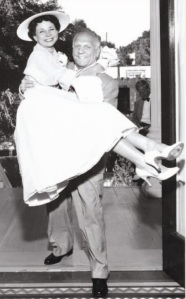 Virginia Knight (1918-2010) was admitted to the San Luigi Orders by Prince-Abbot Edmond II on 28 January 1977, at a champagne reception in honor of Distinguished Humanitarians at the residence of Lady Patte Barham in Los Angeles. She had been California’s First Lady and also provided that state with its first gubernatorial wedding.

On 2 August 1954, Virginia Knight became the second wife of Governor Goodwin Jess “Goodie” Knight (1896-1970), who was in office between 1953 and 1959. Their marriage was also her second; her first husband had been killed in action in World War II. Photographs of the wedding were widely circulated and helped in Knight’s successful bid for re-election that year.

Virginia Knight was the first to advocate that the governor’s residence in Sacramento (which reminded her of a palace) should become a museum, and that a major part of its work should be to honor the state’s First Ladies. Subsequently, with the assistance of Nancy Reagan, this came to pass.

An author of more than 300 poems and an effusive personality whose beauty led to comparisons with Vivien Leigh, she was named Honorary Poet Laureate of Delaware by that state’s governor.

In 1970 she suffered the death of one of her stepdaughters in tragic circumstances. Three months later, her husband died following a stroke. After this, she largely withdrew from society.