H.I.H. Prince don Hugo-José Tomassini Paternò (1927-) is a Knight Grand Cross of the Orders of the Crown of Thorns and of the Lion and the Black Cross, being so appointed by Prince-Abbot Edmond I of San Luigi. His father don Tullio was also a member of the San Luigi Orders.

The Prince is the head of the line of the Dynastic House of Leopardi of Constantinople (Tomassi/Tomassini) and a pretender to the throne of the Eastern Roman Empire by virtue of his descent from the Justinian and Heraclian dynasties. 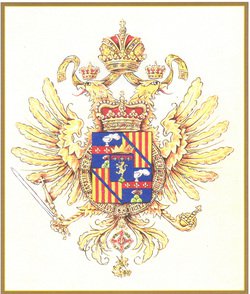 During the latter years of the Second World War, the young Prince, who was a devoted follower of Mussolini, fought as a junior officer in the Italian Social Republic (RSI) Black Brigades. He participated alongside the Waffen SS in combat against the Russians in the eastern theatre and against the British and Americans in northern Italy. For his service he was honoured with the Medaglia d’Argento al Valore Militare R.S.I., the Croce al Merito di Guerra R.S.I., the Medaglia d’Argento al Valore Arditi d’Italia, the Croce Nera del’Ardito di Guerra and the German Iron Cross 2nd Class. During the war, his family property in Fermo was invaded and looted and many books, documents and possessions of a historical nature were lost or destroyed.

The recovery of this property occupied much time and effort for the Prince, and eventually the surviving part of his family library (around 20,000 volumes) was re-organized in 1955  and joined with the Academy that had been founded by the Tomassini Paternò family in 1939. In 1951, the Prince had adopted for his Academy the symbol of the white phoenix, representing the reclamation of the family heritage. This united entity was registered with the National Agency for Popular and Scholarly Libraries under the supervision of the Ministry of Public Education as the “Biblioteca Popolare e Scolastica dell’Accademia Universitaria Internazionale di Fermo del Piceno” (Reg.n.7957), and also referred to simply as the “Historical File”. The Very Revd. Canon Piegallina Guido, Director of the Historical Archives of the Archbishop of Fermo and chaplain of the Tomassini Paterno family, was appointed as the Independent Director of the archive. The Academy made contacts overseas, and in 1952 was joined to the American International Academy which had been founded in 1898. Cultural events were organized in New York among other cities, and a monthly newsletter was initiated and circulated. Among the collaborating institutions in America was the Augustan Society, whose co-founder Archbishop Forest Barber received honours from the Prince.

In peacetime, the Prince devoted himself to the study of history (particularly that of Ancient Rome) and heraldry. He produced a major work, “Universal Encyclopaedia of Knighthood Orders and Decorations” with over 3,000 historical notes. The San Luigi Orders were included in this book. He produced other works on the subject of chivalry, including the study “La Caballeria a través del tiempo” (FF.AA.C., Caracas, 1961).

legitimate successor of the Justinian and Heraclian dynasties of the Eastern Roman Empire and head of the house of Leopardi of Constantinople Tomasi Tomassini Paternò. Mar Joannes Maria had been consecrated bishop on 20 March 1955 by Archbishop Harold Nicholson and would eventually (as Anba Marcos) become Metropolitan of Europe in the Coptic Orthodox Church. The present Prince-Abbot of San Luigi stands in the fifth generation of episcopal succession from him.

The Prince had a close relationship with the government of Venezuela, to which he acted as a heraldic advisor, and received several appointments of attaché and commissioner. He was awarded honours and decorations from around the world, including the Papal Lateran Cross, as well as the Order of the White Eagle, the Order of Polonia Restituta and the Gold Cross of Merit from the Polish Government in Exile. In 1975, he became Grand Protector of one of the branches of the Order of St John.

In 1971, there was an exchange of correspondence between the Prince and Prince-Abbot Edmond II of San Luigi. The Prince wrote that he had been a very good friend of the late Prince-Abbot Edmond I as well as having corresponded with the Count de l’Estrange (erstwhile Chancellor of the Orders). During the post-war years the Prince had lived in Los Angeles and in due course had moved to Miami Beach, Florida.

The Prince succeeded his father on the latter’s abdication on 20 November 1950. He married Donna Margherita-Andreana Caneparo-Carotti.