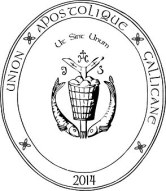 The Abbey-Principality has granted a Charter and Apostolic Mandate to the Union Apostolique Gallicane under the Most Revd. Raphaël-Magnoald Steck, OA, KOCT as Bishop Moderator. The Union is an umbrella body that seeks to bring together those who continue the ministry of the Eglise Gallicane as that was expressed under the primacy of the Abbé Julio, formerly Prelat-Commandeur of the Order of the Crown of Thorns and previously of Prince-Abbot Joseph III of San Luigi.

The Union endorses the Duval Faith and Order Declaration of Prince-Abbot Joseph III agreed at Wisconsin on 16 December 1889 and published in 1890. As well as church missions, it includes in its membership several religious orders.

A website for the Union can be found atÂ http://union-gallicane.org