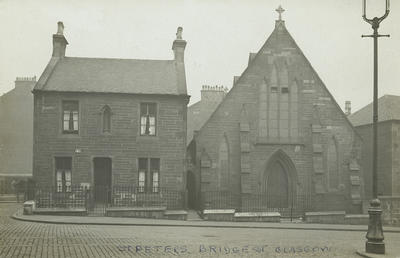 Canon Jan Gruszka (1909-74) was a Chevalier of the Order of the Crown of Thorns, being admitted to the Scottish Priory in 1962.

One of several Roman Catholic clergymen to be members of the Order, Canon Gruszka was parish priest of St Simon’s Church, Partick, Glasgow (pictured left), until his death on 11 November 1974. The parish was a home for Polish expatriates, and the Scottish Priory of the Order of the Crown of Thorns was notably Polish in its membership under the leadership of the Baron de Prus. The Catholic Herald of 16 February 2007 reports former Speaker of the House of Commons Michael Martin (now Lord Martin of Springburn) as saying, “I have fond memories of the Polish Masses I attended in St Patrick’s Church in Anderston in Glasgow and also of Canon Jan Gruszka.”

Canon Gruszka was born in Hadjukach Wielkich, where he graduated from elementary school. In 1930 he graduated from the gymnasium at Królewskiej Hucie. After the cadet school at Szrem, he undertook military service as a non-commissioned officer in the 75th Infantry Regiment of Królewskiej Hucie. In 1931 he commenced seminary studies at the Śląskiego Seminarium Duchowego in Krakow, and studied theology at the Jagiellonian University. He was ordained priest in 1936. After two months at the pastorate of St John the Baptist at Pawłowice, he took up the position of curate in Różańcowej at Halembie in September of that year. Following the outbreak of World War II, he was briefly substitute priest at the parish of St Urban at Woli, and then became vicar at St Anthony and St Dąbrówce and at St Mary Magdalene in Bielszowicach. In 1942, the Nazis removed him from his parish for hearing confessions in Polish. He was forcibly conscripted into the Wehrmacht and served as a medical orderly on the Western Front. He managed to escape from the Nazis and joined the Polish Army for the remainder of the war. The Polish Army was based at Yorkhill Barracks in Glasgow, and it was then that St Simon’s Church became their place of worship.

In peacetime, he settled in Glasgow, where his ministry was directed particularly to the Polish-speaking community there. He is buried in St Peter’s Roman Catholic Cemetery, Dalbeth, Glasgow.