The sudden and untimely passing of Dom Klaus deprives us of a staunch advocate of the Abbey-Principality as well as a distinguished monk, bishop and humanitarian. He was born in Passau, Germany, on 30 September 1959 and received Baptism on 2 October of that year and Confirmation on 15 June 1969. After his schooling, he pursued four years of training as an ornamental gardener and then from 1979-82 attended Bible School in Germany and New Zealand, with internships in Australia, Indonesia and Singapore.

In 1982, he was ordained pastor of a Methodist Free Church in California, which post he followed with youth work in Landsberg am Lech within a Free Church context. The Free Church position did not satisfy him, however, and in 1985 he took the major decision to embrace Old Catholicism. He was ordained deacon the following year and priest in 1987, and served between 1987-90 as a parish priest in Munich. In that latter year he joined the Order of Port Royal.

The Order of Port Royal is an ecumenical Cistercian congregation that dates its foundation to 1705, and in the modern era was revived in 1930 by the Mariavite regionary bishop for Hungary, Thomas de Csernohorsky Fehervary (1917-84). For some years the Order was in decline, and by 1990 a decision point had arrived whereby the last surviving priest, Dom Peter Falk, had to determine whether to close the Order or attempt to revive it. The latter course was chosen, and Dom Peter was elected to the vacant position of Abbot.

Dom Klaus spent the year 1991-92 undertaking pastoral work in Miami, Florida. Returning to Germany, he began, together with Dom Michael Maier, to gather a worshipping group of people who would in time form the nucleus of a religious community. By 1998, several members of the group had committed to religious vows, being recognized as an Abbey of the order in 1999, and the search then began for a building that could serve as a home for them. The following year, a suitable building was located in Kaufbeuren. The community moved from there in 2002 to Pforzen-Leinau and in 2010 to its present home which is again in Kaufbeuren.

The work of the Abbey of St Severin is an example to us all of what can be achieved with a small but dedicated religious community. Alongside their full schedule of worship, the monks began an art school and gallery, taking advantage of the talent of several of their number, and also established a woodworking shop where furniture and toys are made. This enabled the abbey to become self-supporting, and to undertake an apostolate of care and healing towards the sick and suffering. There was a direct and deep-rooted engagement with the local community and a charitable outreach that also extended overseas. At present, there are three monks in the monastery, one monk outside the walls who is a professed Solitary, and two secular professed nuns in addition to a number of oblates.

At the synod in 2002, Dom Peter Falk retired as Prior on grounds of health and Dom Klaus was elected to succeed him, also in time receiving episcopal consecration. The following years were marked by a number of ecumenical links. In 2004, the Order became a part of the Union of Utrecht of the Old Catholic Churches. However, the modernist direction of the Union did not sit well with the theology of the Order, and in 2010 it became independent once more, establishing its own synod, the Christ Catholic Church in Germany. This was in 2012 accepted as the German administration of the Nordic Catholic Church under the Union of Scranton. Sister communities were established in the USA, Haiti and Cameroon, the latter two of which are under the protection of Anglican bishops. Dom Klaus was appointed an Honorary Canon of St Michael’s Anglican Cathedral, Cameroon, in 2008. He was German Superintendent of the International Council of Community Churches.

Dom Klaus served as a trustee of the Art Aid Foundation, Leinau, and as President of PARMED, which provides medical assistance to the Third World. He served as Second Chairman of the St Andrew Volunteer Corps, Stockau, an organisation that developed out of the charitable and chivalric work of the late Helmut von Bräundle-Falkensee. 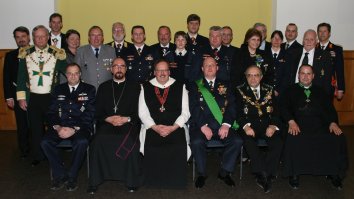 His interest and involvement with chivalric and nobiliary matters was deep and embraced a willingness to undertake extensive study and research rather than simply accepting received opinion. He was particularly knowledgeable on the subject of the chivalric and nobiliary traditions in Africa and those existing within the Church, and was an advocate for the fair treatment of these traditions alongside the more familiar manifestations of Western secular nobility. He was appointed to the noble office of Shufai Ngaibunri by the Fon (King) of Nso, Cameroon, and undertook the elaborate ritual and ceremony there that attends the appointment. Closer to home, he served as Almoner and Grand Chaplain of the Order of St Lazarus (Carpathian Grand Priory) and Superintendent and International Director of the International Green Cross Organisation, its humanitarian arm. He was also a Prelate Grand Cross of Justice in the Order of St John Knights Hospitaller (Commandery of Carpathia of the Russian Grand Priory) and Grand Prior of the Ökumenische Bruderschaft des Heiligen Grabs zu Jerusalem (COSSH), Bavaria. He received the Grand Cross in Silver of the Freundeskreis Hoch- und Deutschmeister Mannheim.

When the Abbey-Principality of San Luigi was revived in 2011 through the election of a new Prince-Abbot after some years of interregnum, Dom Klaus was energetic in his support and proved a most worthy representative in his discharge of the various offices and appointments with which he was entrusted. He was among the small number of those associated with the Abbey-Principality to receive nobiliary recognition, being appointed Duke of Saih Nasra. This title also recognized his work with the Regency of Lomar, of which he became President in 2003. Lomar had been an attempt to create an internationally sovereign non-governmental organisation to aid refugees and other displaced persons, but had early on fallen victim to Nigerian confidence tricksters who used its name without authority. Dom Klaus restored Lomar’s reputation and formed alliances with a dozen other NGOs. He was planning to resume its activities in the future. His ducal title in San Luigi was designated to pass to his successor as Regent of Lomar in the event of his death.

Two aspects of Dom Klaus’s character stand out. One was his unflinching honesty. He did not hesitate to say what he believed, even when it involved exposing the bogus and the insincere, and had the courage to challenge openly those whom he opposed in debate. The other was his great kindness. He loved nature and animals, particularly cats, but was also selfless and unfailingly helpful in his dealings with his fellow men. He was a much valued friend of the Prince-Abbot of San Luigi, who was virtually in daily communication with him up to the night before he died.