The Prince-Abbot has been honoured with two appointments from a senior member of the San Luigi Orders, the Most Revd. Prince Kermit William Poling (Mar Titus).

The Holy and Blessed Order of the Sacred Cup is a fraternal fellowship of Christian men dedicated to the Holy Sacrifice of the Eucharist. The Order was founded on 1 August 1970 under charter of H.B. Peter Zhurawetsky (1901-94), Patriarch of Miensk and all Byelorussia in Dispersion of the Orthodox Catholic Patriarchate of America, with blessings from H.B. Benediktos, Orthodox Patriarch of Jerusalem, who became one of its first members.  In 1988, the Most. Revd. Kermit Poling became head of the Order and Grand Knight Chancellor. Archbishop Poling was consecrated by Patriarch Zhurawetsky on 1 September 1970 and received from him the title of Prince of Miensk. 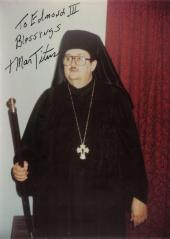 The Order maintains close ties with the Shrines of the Holy Land. The Grand Knight Chancellor and other officers visit on an occasional basis The Cenacle on Mount Zion, a room in an old church built on the traditionally accepted site of the house where the Last Supper was held. Services of Investiture for the Order have been held here and insignia of the order blessed.

In December 1970, the Most Revd. Joseph Raya, Metropolitan of Akko, Haifa, Nazareth and All Galilee in the Melkite Greek Catholic Church, and a Knight of the Order, began the tradition of remembering the Knights of the Sacred Cup at the Christmas Eve Liturgy each year celebrated in “The Home of Our Lord” in Nazareth.

The Order has made periodic donations to the Cenacle and to the Church of Gabriel in Nazareth, in addition to assistance for children in need.

The consecrator of the present Prince-Abbot, Archbishop Professor Bertil Persson, and his predecessor in his offices in the Apostolic Episcopal Church and Order of Corporate Reunion, the late Archbishop Count George Boyer, together with a number of members of the San Luigi Orders, are also counted among the Knights of the Sacred Cup.

Prince Kermit, who was admitted to all three San Luigi Orders by Prince-Abbot Edmond II, is a descendant of King Edward III of England and thereby of several of the Byzantine emperors and the early Kings of Poland. He traces both his paternal and maternal lines via traditional genealogies to Leszek (Lech), the legendary founder of Gniezno. He has established the united heritage of his paternal and maternal ancestry as the Dynastic House Polanie-Patrikios. In 2006, the House established a study society to foster interests in various aspects of Byzantine history and culture, the Constantinople Orthodox Institute.

Now retired, Prince Kermit served as a Petty Officer on active duty with the United States Navy (receiving the Good Conduct Medal) and subsequently with the Identification Division of the Federal Bureau of Investigation before training for the ministry of the Evangelical United Brethren Church. In 1968, that church merged with the Methodist Church to become the United Methodist Church. Prince Kermit has pastored churches in West Virginia including the Crossroads United Methodist Charge near Parkersburg, Hope-Halleck Charge UMC near Morgantown, Trinity and Warren UMC Charge near Grafton, and First-Trinity UMC Charge at Pennsboro. He has been chaplain of Grafton City Hospital, broadcaster of the “Morning Devotions” radio programme, Instructor in Bible History for the United Methodist Lay Academy, and a lecturer on religious subjects whose talks and interviews have been broadcast in over twenty countries. He is past Assistant Secretary of the West Virginia Conference of the UMC.

He received Holy Orders in the Orthodox tradition alongside his UMC service and on 11 April 1972 was consecrated by Dr William Bernard Crow (1895-1976) (pictured), Sovereign Prince-Patriarch of Antioch in the Ancient Orthodox Catholic Church, who was the senior bishop in the Antiochean succession from Mar Julius of Iona (Ferrette) and the consecrator of Mar Georgius of Glastonbury (q.v.) Dr Crow appointed Prince Kermit as Bishop of the Apostolate of the Holy Wisdom and on 7 October 1972 as a knight in the Sacred Antiochene Order of Saints Peter and Paul. Dr Crow was also a Knight of the Sacred Cup.

Prince Kermit has been appointed an Ambassador of Good Will for West Virginia by the Secretary of State and is an Honorary Citizen of Texas, Tennessee and Georgia by appointment of the Governors of those states. In 1988, the Ohio House of Representatives awarded him a commendation for outstanding achievement in ministry and the Ohio Senate commended him for achievement as a religious leader. He has further received a Citation of Commendation and Praise from the Senate of the State of New Jersey. Among many chivalric and religious awards he has received a knighthood from King Peter II of Yugoslavia (late High Protector of the Order of the Crown of Thorns), the Cross of St Mark from Stéphanos Cardinal Sidarouss, Patriarch of Alexandria of the Coptic Catholic Church, and the Cross of St Antony of the Desert from the late Anba Marcos, Archbishop of France of the Coptic Orthodox Church. Within the Abbey-Principality of San Luigi he has received the title of Duke of Kelibia and is also a Frater Knight Grand Cross of the Valiant Order of St John the Baptist. He is a Fellow of the Augustan Society and a recipient of its Principate of Augustus Commemorative Medal.

He is married to his fifth cousin, Patricia (née Groves) and has two sons, three grandchildren and one great-grandson.