The Sovereign Orthodox Order of the Knights Hospitaller of St John of Jerusalem is a direct descendant of the world’s oldest order of chivalry. Founded around 1023 by Blessed Gerard Thom to provide care for poor, sick and injured pilgrims to the Holy Land, the Order of St John was associated with an Amalfitan hospital in Jerusalem. When Jerusalem was conquered by Christians during the First Crusade in 1099, a Papal charter was issued to the Hospitallers as a religious and military order responsible for the care and defence of the Holy Land. After the Holy Land fell to the Muslims in 1291, the Order moved first to Cyprus, and then in 1309 captured Rhodes, where it became sovereign. The dissolution of the Knights Templar in 1312 was to the benefit of the Order, and at this time eight “tongues” of the Order were established in the countries where it was active. In 1522, the knights were defeated after six months of siege by the Muslim forces, and retreated to Sicily. In 1530, King Charles of Sicily gave them Malta, Gozo and Tripoli, which they ruled as a perpetual fiefdom in exchange for an annual falcon as tribute. In 1565, following the Great Siege of Malta, the knights won a significant victory over the Muslims, though hugely outnumbered.

During the Reformation, some of the Order’s commanderies in northern Germany and the Netherlands became Protestant and have remained so ever since, and the Order was disestablished in England, Denmark and other northern European countries. Having lost the initial reason for its existence, and with no battles to fight, it turned its attention to combatting piracy and saw a period of economic decline as its currency, the scudo, lost value. As a result, the knights began to attack Muslim ships in search of plunder, and again became wealthy. Many enrolled in foreign navies in search of adventure. This meant that grants to the Order diminished and that its economic survival became more and more dependent on conquest. Notwithstanding this, Malta flourished under the Knights and became regarded as one of the great powers of Europe.

The French Revolution saw the attempted abolition of the Order, and in 1798, Napoleon I captured Malta, forcing the knights to surrender. This signalled the end of the Order on Malta after 268 years. The largest group of knights made their way to Russia, where Czar Paul I (pictured at left wearing the Crown of the Order) gave them shelter and was elected their Grand Master, with the Apostolic Delegate to St Petersburg, Mgr. Lorenzo de Litta, officiating at the ceremony. Historians differ as to whether the original Order survived at this point, or whether, the original Order having been dissolved by Napoleon, new Orders of St John were now created respectively by Czar Paul I in 1798 (the Russian Order), and by the Pope from 1803-14, revived in 1879 (the Sovereign Military Order or Order of Malta). Both of these Orders have claimed the tradition of the original Hospitallers, as well as various other bodies, some of which gained the protection of their respective states*.

In the wake of the Russian Revolution of 1917 the Order went into exile. In 1928, thirteen surviving Hereditary Commanders of the Order met in Paris as the Union des Commandeurs et Chevaliers Hereditaires, supported by three others, and set about re-establishing the Russian Grand Priory. Their Declaration read, in part:

“Later events have limited the activity of the Grand Priory of Russia; a revolution had provoked a deficiency in the legitimate power throughout the Empire; yet nothing could weaken our hereditary right as a regular affiliation and as a sovereign order of chivalry. We were born with this privilege and we retain it without further question in law. Circumstances dictate that we should now sustain without futile and vain ostentation, the prerogatives acquired by our ancestors. The tragic test which overwhelmed our Fatherland calls us to an activity full of abnegation and sacrifice worthy of the best traditions of the illustrious Order of St John of Jerusalem. It is, therefore, our duty that all of us shall initiate the following:
1) Re-establish the activity of the Russian Grand Priory of the Order of Malta created and regularised by a treaty signed on the 4th-15th January, 1799, between the Throne of Russia and the Sovereign Order of Malta.
2) Appeal to direct descendants of other Russian Hereditary Knights of Malta in order to urge them to rally with us within the fold of the Grand Priory of Russia which we are reconstituting abroad.”

Two of the Hereditary Commanders had become members of the branch of the Order of St John (Order of St John of Jerusalem, Knights Hospitallers), that was under High Protection of the late King Peter II of Yugoslavia, who is pictured at right. Following the death of King Peter in 1970, these two, Prince Sergei Troubetskoy and Prince Serge Sergeievitch Belosselsky-Belozersky, formed a Priory in New York in 1972 together with another Hereditary Commander, Count Nicholas Alexeievitch Bobrinskoy, great-great-great grandson of Empress Catherine the Great. This Priory became the centre for attempts to unify the remaining Hereditary Commanders and their descendants, and to bring together other elements of the King Peter Order which had split into factions after the King’s death. An alliance was also pursued for a time with the Most Sacred Order of the Orthodox Hospitallers, which was under the patronage of the President of Cyprus. On 20 April 1977, a meeting took place at which three Hereditary Commander families were present along with other Russian nobles, and this elected Count Bobrinskoy as Grand Prior of the revived Russian Grand Priory.

In September 2005, Prince Michael of Russia and Count Bobrinskoy erected the Commandery of Carpathia of the Russian Grand Priory. Among the very limited appointments made to this Commandery were the late Dom Klaus Schlapps, OPR, OA, Duke of Saih Nasra in the Abbey-Principality of San Luigi, and the Prince-Abbot Edmond III of San Luigi (subsequently Prince Edmond of Miensk). Both men were appointed as Prelate – Knight Grand Cross of Justice, and the privilege of extraterritoriality was extended to the Prince-Abbot’s appointment. The category of Justice is exclusively reserved, as was the case historically, for those who can provide proof of noble status. The formation of a presence of the Russian Grand Priory in the United Kingdom was discussed on several occasions between Dom Klaus and the Prince-Abbot, who both deplored the divisions that had come to exist between the representatives of the Russian and Yugoslav traditions of St John and sought, in the spirit of the efforts of the 1970s, to bring about unity where possible. The Prince-Abbot had previously accepted an appointment as Chaplain to the British Association of the Russian Grand Priory, which represents a separate descent from the 1928 Russian Hereditary Commanders and whose roots lie in the former Grand Priory of the British Isles of the King Peter Order. 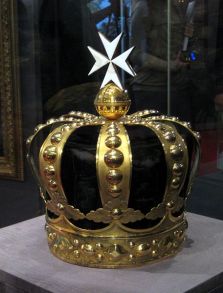 Following the sudden and unexpected death of Dom Klaus in January 2013, a number of changes took place. It became clear that, although it was wished that amicable relations should continue with the Carpathian Commandery and the present-day Russian Grand Priory, some degree of independent re-organization would be necessary in order to continue the work that Dom Klaus and the Prince-Abbot had planned together. In August 2013, the committee of the Supreme Council of the Abbey-Principality of San Luigi that had been created to examine the matter petitioned the Prince-Abbot to exercise his right as a fons honorum to erect an autonomous and extraterritorial Protectorate of San Luigi of the Orthodox Order of the Knights Hospitaller of St John of Jerusalem. The Protectorate used the former name of the Order to distinguish itself from the name that was currently in use by the Russian Grand Priory. This name was used in full on all official documents.

“We, Edmond III, by the grace of God Prince-Abbot of San Luigi etc. etc., being desirous of giving a proof of our particular esteem and affection towards the Orthodox Order of the Knights Hospitaller of St John of Jerusalem, declare, that we take the said Order under our protection and that of the Abbey-Principality of San Luigi; and that we will employ every possible care and attention to maintain it in all its rights, honours, privileges and possessions.”

When the Prince-Abbot of San Luigi additionally succeeded as Prince of Miensk and Ecclesiast of All Byelorussia and as head of the Royal House Polanie-Patrikios in 2015, the decision was taken to elevate the Protectorate to the status of a Royal Byelorussian organization, thus bringing it closer to its immediate history and heritage.

As a result, the present character of the Royal Byelorussian Protectorate of the Orthodox Order of the Knights Hospitaller of St John of Jerusalem is that of an ecumenical and extraterritorial Christian ecclesiastical community under the aegis of the Prince of Miensk and Ecclesiast of all Byelorussia. As such, it represents a return to the Order’s origins as a body under religious governance.

While it shares a common history with other institutions representing the Order of St John and the Russian Grand Priory and is open to the possibilities of collaboration with them, the Protectorate is self-governing and has no official relationship with any other Order of St John at the present time. Membership in the Protectorate is strictly by personal invitation of the Prince and is extended ecumenically to all Christians, with non-Christians admitted to all ranks as honorary Knights or Dames. Associate membership is extended to members of other legitimate Orders of St John who wish to support the work of the Protectorate; if admitted as associates, they retain their existing rank in their “mother Order” and cannot be promoted within the Protectorate. The Protectorate preserves the historical and nobiliary traditions of the Order that it has inherited by virtue of its antecedence, and as is traditional, voting rights are reserved to members in the category of Justice. Since it also has a distinctive ecclesiastical character, it is especially devoted to the support of the work of all Johannites worldwide through prayer.

*Those interested in the history of the Order of St John and the modern representatives of its legacy are recommended to read the thesis of Dr. Hendrik J. Hoegen Dijkhof “The legitimacy of Orders of St. John” (doctoral thesis of the University of Leiden, 2006, available online at https://openaccess.leidenuniv.nl/handle/1887/4576).