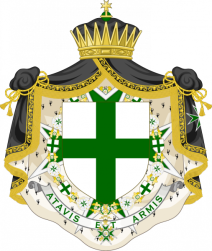 The present-day Military and Hospitaller Order of St. Lazarus of Jerusalem looks back to an ancient origin. At some time after 1098, the crusaders at the Latin Kingdom of Jerusalem founded this order of chivalry at a leper hospital. The founding knights were themselves lepers, and they devoted their order to the treatment of those with the disease. King Baldwin IV of Jerusalem, who was a leper, may have been a knight of the Order or received assistance from it. It was probably by the end of the twelfth-century that the Order had become a military order, and the four classes of members – brothers, knights, clerics and donors – were acknowledged in a Bull of Pope Gregory IX of 1227. Definite evidence of the Order’s active participation in military campaigns is only documented in 1234 when Pope Gregory IX made a general appeal for aid to the Order to clear debts contracted in the defence of the Holy Land. The Ordinis Fratrum & Militum Hospitalis Leprosorum S. Lazari Hierosolymitani under the Augustinian Rule was confirmed by the Papal Bull Cum a nobis petitur of Pope Alexander IV in April 1255. The order established “Lazar houses” across Europe to care for lepers, and was well supported by other military orders which compelled brethren in their rule to join the order on contracting leprosy.

The symbol of the Order of St Lazarus is the eight-pointed green Maltese cross. This is believed to have given rise to the use of a green cross as a symbol by pharmacies worldwide. 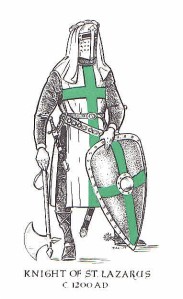 The order remained primarily a hospitaller order but it did take part in a number of battles, including the Battle of La Forbie on 17 October 1244 (where all of the Lazar brethren who fought died) and the Battle of Al Mansurah on 8–11 February 1250. The leper knights were protected by a number of able-bodied knights but in times of crisis the leper knights themselves would take up arms. The order quickly abandoned their military activities after the fall of Acre in 1291 and the dissolution of the Knights Templar due to their relative poverty. After this, the knights moved to Cyprus, then Sicily and finally to Boigny near Orléans in France, where King Louis VII of France (an ancestor of the Princes of Miensk) had given the Order a property in 1154, which had been the Order’s headquarters outside the Holy Land.

In 1308, the Order was placed under the temporal protection of King Philippe IV of France. This protection was confirmed in 1604 by King Henri IV, and in 1608, the order was merged with the Order of Our Lady of Mount Carmel, becoming the Royal, Military and Hospitaller Order of Our Lady of Mount Carmel and St. Lazarus of Jerusalem. This amalgamation eventually received canonical acceptance on 5 June 1668 by a bull issued by the Cardinal Legate de Vendôme under the authority of Pope Clement IX. While being a French Royal Order, the Order remained under apostolic authority. Meanwhile, in 1572, Pope Gregory XIII had merged the Italian branch of the Order with the Order of St Maurice (founded 1434), creating the Order of Ss. Maurice and Lazarus, of which the Head of the Royal House of Savoy is Grand Master today. 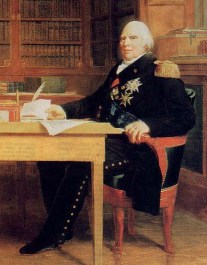 In 1791, the French Revolution suppressed the Order in that country and confiscated its property. However, the future King Louis XVIII (pictured left wearing the Grand Cross) continued to confer it in exile, and on the restoration of the monarchy the Bourbon monarchs continued as protectors until 1830. On 12 March 1825, King Charles X issued a declaration that the United Order of Our Lady of Mount Carmel and St. Lazarus of Jerusalem would be allowed to become extinct. Under canon law, this would occur one hundred years after the death of the last member unless the Order was canonically re-organized. The last such member died in 1856, which would have allowed for canonical re-organization until 1956. 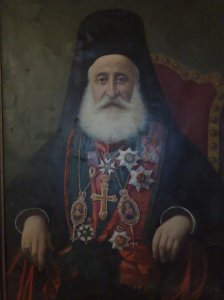 In the event, canonical re-organization had occurred in 1841, when the Melkite Greek Patriarch Maximos III (Mazloum) granted his spiritual protection to the Order, and this state of affairs continued under his successors until the Patriarch transferred the government of the Order to a Council of Officers in Paris in 1910. This was confirmed by blessing of Patriarch Cyril VIII (Geha) (pictured right) on 3 June 1911. The factual position regarding the protection of the Order in the nineteenth-century has since been confirmed by successive Melkite Patriarchs to this day, notably by Patriarch Maximos IV (Sayegh) in 1965 and Patriarch Gregorios III in the Kevelaer Declaration of 2012. It should also be remembered that the Patriarch was a fons honorum by right of his office. 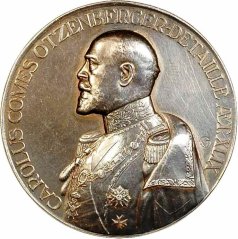 Although much of the nineteenth-century had been a period of decline for the Order, by the 1930s it was active once more, being led by Comte Charles Otzenberger-Detaille (pictured left) and the Duke of Seville. From 1961, at the initiative of the late Colonel Robert Gayre of Gayre and Nigg, the Order agreed to admit Protestants for the first time and became ecumenical rather than purely Catholic. Gayre became an enthusiastic promoter of the Order and ensured its expansion, though unfortunately a good deal of his energy was spent in attacking other Orders so as to vaunt the legitimacy of St Lazarus.

In 1973, the Order divided into two factions, the Paris Obedience and the Malta Obedience, which continued under separate Grand Masters, the Duke of Seville and the Duc de Brissac. A third faction emerged in 2004 under Prince Charles Philippe, Duke of Anjou. In 2008, a partial reunion was promoted between the larger Lazarite bodies, resulting in the emergence of the United Grand Priories. 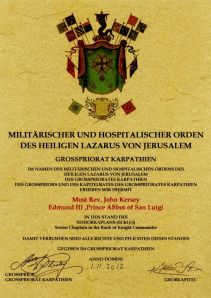 The Constitutional Jurisdictions of Carpathia (Grand Priory of Carpathia) of the Order were formerly organized under the Paris Obedience. In 2008, they rejected unification under the United Grand Priories, citing many points of difference, among which was the proposed dilution of the hierarchical and nobiliary character of the Order and the rejection of its traditional history, and continued autonomously. The late Dom Klaus Schlapps, OPR, OA, Duke of Saih Nasra in the Abbey-Principality of San Luigi, became a member of the Order in 2005, becoming Senior Chaplain for the Commandery of Slovakia in 2006 and was subsequently promoted to Almoner (Grosskapitel) and Ecclesiastical Grand Cross Chaplain, the most senior chaplain in the Grand Priory. Dom Klaus held the offices of Preceptor of Bavaria and Commander of Klausenberg in Siebenbürgen. He was Patron of the International Green Cross Organization in Bavaria and a member of its Board of Directors. In November 2012, Dom Klaus was responsible for introducing the Prince-Abbot of San Luigi (now also the Prince of Miensk) to the Order, in which he was appointed a Senior Chaplain in the rank of Knight Commander, in the category of Justice. The privilege of extraterritoriality was extended to this appointment so as not to bring about any conflict with existing Lazarite bodies in the United Kingdom; nor was any oath of obedience imposed. The category of Justice is exclusively reserved, as was the case historically, for those who can provide proof of noble status.

Following the sudden and unexpected death of Dom Klaus in January 2013, a number of changes took place. It became clear that, although it was wished that amicable relations should continue with the Carpathian Grand Priory, some degree of independent re-organization would be necessary in order to continue the work that Dom Klaus and the Prince of Miensk had planned together. In August 2013, the committee of the Supreme Council of the Abbey-Principality of San Luigi that had been created to examine the matter petitioned the Prince-Abbot to exercise his right as a fons honorum to erect an autonomous and extraterritorial Protectorate of San Luigi of the Military and Hospitaller Order of St. Lazarus of Jerusalem in which, in consequence of his role as Protector, he would serve as Prelate Grand Cross of Justice.

“We, Edmond III, by the grace of God Prince-Abbot of San Luigi etc. etc., being desirous of giving a proof of our particular esteem and affection towards the Military and Hospitaller Order of St. Lazarus of Jerusalem, declare, that we take the said Order under our protection and that of the Abbey-Principality of San Luigi; and that we will employ every possible care and attention to maintain it in all its rights, honours, privileges and possessions.”

When the Prince-Abbot of San Luigi additionally succeeded as Prince of Miensk and Ecclesiast of All Byelorussia and as head of the Royal House Polanie-Patrikios in 2015, the decision was taken to elevate the Protectorate to the status of a Royal Byelorussian organization, thus bringing it closer to its immediate history and heritage.

As a result, the present character of the Royal Byelorussian Protectorate of the Orthodox Order of the Military and Hospitaller Order of St. Lazarus of Jerusalem is that of an ecumenical and extraterritorial Christian ecclesiastical community under the aegis of the Prince of Miensk and Ecclesiast of all Byelorussia. As such, it represents a return to the Order’s origins as a body under religious governance.

While it shares a common history with other institutions representing the Order of St. Lazarus and is open to the possibilities of collaboration with them, the Protectorate has no official relationship with any other Order of St Lazarus at present. Its charitable work is represented by the San Luigi Orders Charitable Trust, whose objects include the relief of poverty, sickness and distress.

Membership in the Protectorate is strictly by personal invitation of the Prince and is open to baptised Christians of any denomination. Non-Christians may be admitted to the ranks of the Order as honorary Knights or Dames. Associate membership is extended to members of other legitimate Orders of St Lazarus who wish to support the work of the Protectorate; if admitted as associates, they retain their existing rank in their “mother Order” and cannot be promoted within the Protectorate. The Protectorate preserves the historical and nobiliary traditions of the Order of St Lazarus that it has inherited by virtue of its antecedence, and as is traditional, voting rights are reserved to members in the category of Justice. Since it also has a distinctive ecclesiastical character, it is especially devoted to the support of the work of all Lazarites worldwide through prayer.