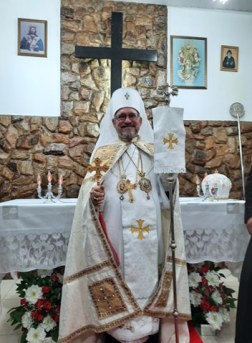 The Catholicate of the West has been informed of the recent death of the Most Reverend Nagui Youssef Zayat, Metropolitan of Brazil and Exarch for Latin America of the Byelorussian Patriarchate of St Andrew the First-Called Apostle after contracting COVID-19. He was seventy-two years old.

Nagui Youssef Zayat was born in Cairo, Egypt, on 5 March 1949. He became a member of the Byelorussian Slavic Orthodox Church Abroad under the late Archbishop Viktor Ivan Busa, which was part of the American World Patriarchates. This church built up a significant following in Brazil, and acquired the Cathedral of St George and St Sebastian in Rio de Janeiro (pictured below), where (as of 2021) about fifty families worshipped. Zayat was consecrated bishop there on 28 June 1991 and appointed diocesan bishop and eparch of Rio de Janeiro. He was promoted to archbishop and eparch of the same diocese on 30 November 1992, and to archeparch in 2002.

In 1995 he received appointment as Grand Cross of Justice with Collar of the Ordre Chevaleresque et Initiatique de la Couronne Atlantide de Mauretanie from its Grand Master, Dom Saul III Kaesar Augustus. In 2002, he was ennobled as Baron of St Nicholas of Myra by Kyr Athanasios Aloysios I. Both of these fontes honorum were descendants of formerly-reigning Roman dynasties. In 2015, Kyr Athanasios would promote him to Prince-Assistant of the Pro-Patriarchal Ecumenical Sacred Throne of the Aryas. In 2008, he was appointed Knight Commander of the Sovereign Catholic Orthodox Order of St Michael the Archangel of the Byelorussian Slavic Orthodox Church Abroad. 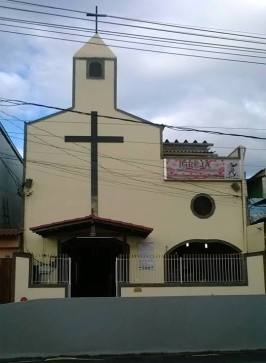 In Brazil, from 2006 onwards, the governance of the church was delegated by Patriarch Viktor to the late Patriarch Athanasius (Luiz Antonio do Nascimento) with Zayat serving as one of the two assistant bishops to the Patriarch. After the death of Patriarch Viktor in 2013 the jurisdiction united with the other American World Patriarchates Byelorussian body, the Byelorussian Orthodox National Church in Exile under Patriarch Yuri (Ryzy-Ryski). However, with the deaths within a short period of Patriarch Yuri in 2015 and Patriarch Athanasius in 2018, the American World Patriarchates were left without leadership and the Brazilian jurisdiction fragmented.

In this context, Dom Nagui made approach to the Byelorussian Patriarchate of St Andrew the First-Called Apostle in August 2019 and was received by incardination, whereupon he became a bishop of the Catholicate of the West and was appointed Metropolitan and Exarch, subsequently being further appointed as co-adjutor of the Patriarchate. He was further appointed to the Order of Corporate Reunion by Prince Edmond as its Prelate. His ministry continued to be successful, with expansion both in Brazil and other countries in Latin America, and a successful Synod was held at the Rio cathedral in December 2020. He was in regular touch with Prince Edmond and throughout his communications his steadfastness in the Faith and pastoral warmth towards others were always apparent. It was clear that he was both loved and respected and that his ministry touched many and was greatly valued within and beyond Rio de Janeiro.

The affiliation of the Cathedral and parishes in Brazil to the Patriarchate will continue after Dom Nagui’s passing and further details will be made available once the Brazilian Synod has met to elect his successor.

Our condolences go to his family at this difficult time.